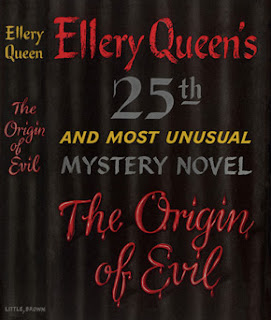 Synopsis: Ellery Queen travels to Los Angeles to relax and write a book. Laurel Hill locates him and asks him to investigate the untimely death of her father, Leander Hill. Leander and Roger Priam are partners in a jewelry business. Hill had found a dead dog and a warning note on his doorstep, and the fright causes a heart attack and his death. Priam, a paraplegic with a femme fatale wife Delia, lives nearby and has a secretary/assistant Alfred Wallace who helps care for him. Priam receives a sealed box which also frightens him.

Someone is on a revenge trip against them, and with the death of Leander, the threats now focus on Roger Priam. Additional warnings follow.

Ellery finds a blank - nothing can be found about Leander's or Roger's past, or even Alfred's.

Delia makes come-ons to Ellery. The story comes out that Roger hired Alfred to not only assist him, also to service Delia in his 'absence'.

Leander's daughter Laurel takes the initiative to chase down clues, and enlists Delia's son Crowe Macgowen as well, even sleeping with him to obtain a key to Delia's.

Review: This was written in 1951, at the height of the mid-century modern movement, and this book reflects it. Chapter 1 starts out with a lot of abstraction, and run-on sentences that fill nearly a page each. The first sentence refers to Ellery Queen having a corpse at his feet, and it took a while to realize that the corpse is not a literal corpse, but a metaphor for the city of Los Angeles. I know, quite a stretch. I almost gave up before getting to Chapter 2. Things starting settling down at the end of Chapter 1, and we finally had some Facts: a death under suspicious circumstances.

There is a sexual undercurrent throughout the story, which is unnecessary to the plot and distracting. Delia makes overtures to any male she encounters, and Laurel does not hesitate to use sex to get what she wants from Macgowen. And why does Ellery question witnesses about their sex lives? None of this is relevant, or part of the plot.

The reveal at the end is incredibly obscure and complex, but does the job but leaves me scratching my head at believability.