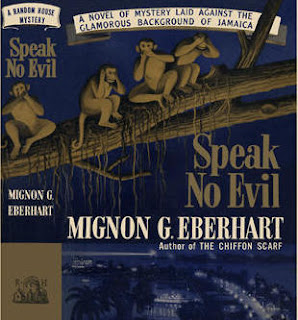 Synopsis: In their Jamaican villa, Elizabeth Dakin is already regretting her empty marriage to unstable Robert Dakin, a successful businessman in war materiel. He is also a dipsomaniac (obsolete word for alcoholic). She is hoping to reunite with her old flame, Dyke Sanderson (also Dakin's nephew).

Dyke arrives, along with Dakin's business partner, cool, elegant Ruth Reddington; who attaches herself to Dakin while Elizabeth tries to reunite with Dyke.

Dakin gives Elizabeth some precious emerald jewelry, and has her wear it to a dinner along with Dakin's friend, Cyril Kirby; who also has his eye out for Elizabeth. At the dinner, she encounters Dakin's catty first wife, Charmian, who says the jewels rightfully belong to her. Awkward.

Back home after the dinner, Elizabeth tells Dakin she plans to leave him. Then Dakin is found in his study, shot dead. Very convenient. Ruth Reddington promptly blindsides Elizabeth by telling the police she the only one who could have done it.

Review: I enjoy Mignon Eberhart for her descriptions of lush, warm scenes; and she never fails to set them up in my mind's eye.

A common theme in many of her stories, the innocent protagonist (Elizabeth) is trapped in a worthless marriage, has her next husband all lined already, then winds up being the prime suspect in the murder of husband #1.

The gimmick of the three monkeys is ignored for most of the book, but explained in the end in a rather disappointing connection, with little significance.

The long and complicated explanation at the end was a bit tedious but a satisfactory conclusion.

Understanding the murder requires a visualization of the odd room arrangement, which is described but not illustrated; so here is my version for your enjoyment. Note that Elizabeth has to pass through the "little passage" and Robert's study (murder scene) in order to get to the rest of the house. 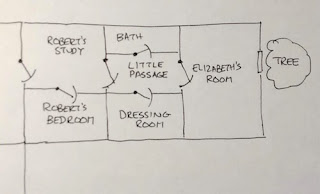