The D.A. Calls It Murder by Erle Stanley Gardner, 1937 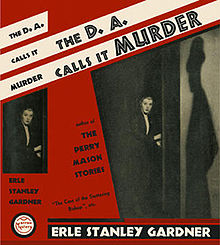 The full series is:
Major characters:

Synopsis: Doug Selby has just won election to District Attorney, and Rex Baldwin also just won election to sheriff. The populace is divided, and the election was close. The Clarion supported Selby and Baldwin, and rival paper The Blade opposed them. They have just taken office when a minister, Charles Brower, is found dead in a hotel room. Circumstances point to suicide, but Selby suspects foul play. An autopsy reveals the death is due to morphia (morphine).

The widow, Mary Brower, is notified - but when asked to identify the body, says it is not that of her husband. Either the body is not Charles Brower, or the widow is not Mary Brower - which is it? The deceased is also found to have been fascinated with actress Shirley Arden, who resides in the same hotel.

Review: This first Doug Selby story shows Selby a bit uncertain in his new role as D.A. There is a lot of emphasis on the pressure of the press. Reporter Sylvia Martin is a puzzle, she is sometimes a hard-boiled Brenda Starr with her feet up on his desk, and sometimes she comes to tears as she begs Selby to give her an exclusive story. Which is she? I do like the Brenda Starr version better.

There is a side story occurring about the "Perry estate" - this is a typical Perry Mason puzzle in which a couple die in a car accident, but who inherits depends upon which one died last. It seems unconnected to the main story until the last few pages when it is tied in.

Secretary Amorette Standish has a minor role. I was hoping she would be a Della Street but she is only marginal to the story. Perhaps she is developed more later in the series.

Overall, a good start to the series. Selby is not so confident and assertive as Perry Mason, and is bewildered at times by clues unravelling all about him as the press pounds at his door.