The Portcullis Room by Valentine Willliams (1933) 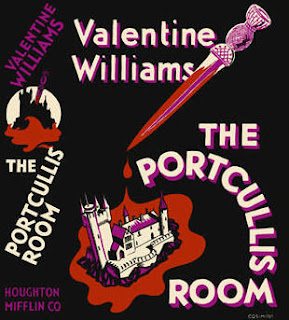 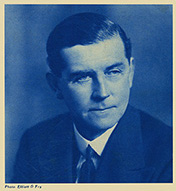 The new arrivals:
Residents and locals:
The bad guys:
Long dead prior to the story, but important to it:
Locale: Hebrides Islands, off Scotland

Synopsis: Wealthy American Stephen Garrison has a whim to buy a Scottish castle. He and his accountant, Philip Verity; girlfriend Phyllis Dean, and her mother Mrs. Dean arrive at Castle Toray by boat. Toray McReay, laird (lord) of the castle welcomes him - the place is way too big for him to deal with any more. His daughter, Flora McReay, is not quite so sold on the idea of selling.

Toray's son, Ronald McReay, was killed in the war. But he did manage to pass a pile of worthless checks while gambling, and now snarky Vicomte Rauol d'Arenne shows up to collect from his father, bringing along his tough guys Oscar Berg, Major Carlos Mansard, and Nick Boldini. Stephen remembers the Vicomte, they had come to blows a few years earlier.

The castle has a big bedroom called the Portcullis Room, as it was situated above the old portcullis (long gone) which shut the castle off from the sea. Generations ago, an enemy of the McReay's, Hugh MacNeil, sought shelter from a storm and they put him up for the night in the Portcullis Room. Come morning, he is found stabbed to death, his blood permanently staining the floor. His ghost is said to walk the castle every year on the anniversary of his death (Sept. 29), which happens to be Michaelmas.

Here is it Michaelmas again. Vicomte d'Arenne is put up in the Portcullis Room. He is then found stabbed with McReay's dirk (dagger), lying on the very spot where High MacNeil died.

Tidal conditions and storms delay arrival of authorities. First, Oscar Berg takes on an investigation. Then the laird appoints Philip Verity to take over. Meanwhile, things are not going well between Garrison and Phyllis, as he has his eye on Flora.

What's not to like about a stormy night in a dark old castle on an island, replete with a scary history, and secret passages? Once you have the cast figured out (see list above), it moves right along. It is a bit predictable as you just know who is going to get it, how, and where. It is interesting how one of the "bad guys" (Oscar Berg) takes the role as the initial investigator, serving a good purpose nonetheless.

I had to look up definitions a few times - to save you the trouble:


We also see the "ugly American" theme present, when the Americans arrive with unlimited money to just buy up a castle sight unseen just because they don't have one.

Dialects (English with a Gaelic accent, and Italian) are rendered in phonetics and difficult to read and understand.