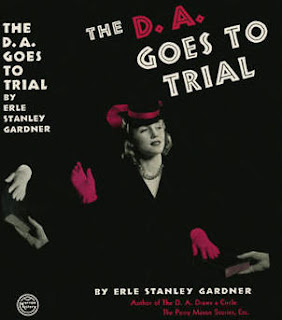 Synopsis: One night, outside Madison City, a hobo is struck by a train and killed. It appears accidental. However, a number of odd aspects soon come to light.

Bank director Mark Crandall approaches D.A. Doug Selby with a concern. He had recommended John Burke for employment as accountant at the Los Alidas Lumber Company. Then he saw him meeting with a broker, but going by the name of Allison Brown. Suspicious of financial wrongdoings, he asks Selby to investigate. The problem is there has been no crime - so nothing to investigate.

Meanwhile, it comes to light the dead hobo was seen earlier at the home of John Burke, getting cozy with Burke's wife, Thelma. Selby finds auditors at work at the lumber company, but bank president George Lawler brushes that off as routine and claims nothing is wrong.

Selby and reporter Sylvia Martin fly to Tucson to find Thelma Burke has run off with Arizona rancher James Lacey, who was her first husband. Some have identified the dead hobo as her curren husband, John, but some are absolutely certain it is not him.

There are lots of suspicious circumstances, but still Selby finds no crime. Then George Lawler is found shot in his bank vault, the vault looted. Now there is a crime.

With a tentative identification of the dead hobo as John Burke, Lacey and Thelma are arrested on a murder charge. They retain attorney Inez Stapleton, Selby's rebuffed former girlfriend, so now they are legal adversaries as well.

Review: I have always enjoyed Gardner's writings about the desert - both in fiction and nonfiction. This story has a lot of action taking place at an Arizona ranch in the desert, and the descriptions of the ranch house and the desert itself are a treat. It is obvious ESG is quite familiar with a desert environment.

The chain of events leading to the two murders turns out to be quite complex, and after a certain point I cease trying to follow it all in my head and just take the writer's word for it. There are a lot of events, but really no red herrings. Everything, no matter how trivial, is all tied together at the end.

Not only does this story present a lot of loose threads, there is also the tension between Selby, Inez Stapleton (the former girlfriend, now defense attorney), and current flame Sylvia Martin. There are a lot of dagger-stares between the two women.

Posted by Rick Mills at 9:00 AM No comments:

The Penthouse Murders by Raymond Holden (1931) 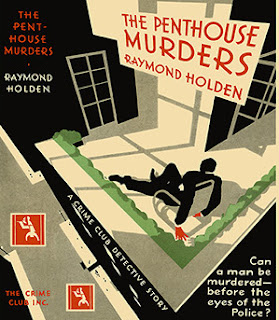 About the author: Little is known (by me) about this author. Wikipedia has an article on author William P. Holden, but I am not convinced it is the same person; as the one in the article wrote books of poetry and music history, no fiction is mentioned.

Synopsis: Two wealthy New York City buddies, Tappan Willett and Charles Corlear, live together summers in the city while their families head off to the luxurious suburban estates. One night they decide to go to a penthouse party of an acquaintance (Eliphalet Barnwell), and on the way pick up their P.I. friend George Harper.

They arrive at Barnwell's penthouse. As they are going in, they meet a woman (Barbara Holger) on her way out. Once inside, they find Barnwell dead - stabbed - on the terrace. No one seems to be around. Harper heads out in pursuit of Holger, as she must have been the last one to see Barnwell alive. Willett and Corlear call the police, and while looking around, find Barnwell's manservant, Julio, alive and well, sleeping in his room. The police arrive. While they investigate, Julio is now found with a knife in him - dead.

Barnwell's attorney, Rufus Polhemus, arrives for an appointment with Barnwell, unaware he is no longer living.

Harper follows Holger to her apartment. She attempts to escape but Harper finds her in the adjacent building. While in his custody, she sustains a minor gunshot wound also.

There are some issues with this book.


This book had a great premise - a murder (Julio) occurring while the police are present, but no murderer to be found.

As the last few pages approached, I was skeptical all the loose ends could be wrapper up - there were too many outstanding: the coded message? who killed Barnwell? who killed Julio? how was it done with the police present? who shot Barbara? Why does she have three different identities?

The Barnwell murder is the primary puzzle, and the murderer is, indeed, revealed. We find the murderer used the old dodge (well, in 1931, it could have been a new dodge) of injuring himself following the murder, to make it appear he is an additional victim).

The big letdown is the Julio murder. At the end, this is brushed off with a speculation that someone came in the window and did it, then left. Sigh.
Posted by Rick Mills at 9:58 AM No comments: 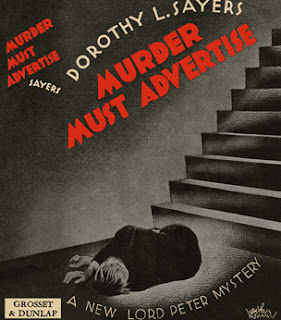 About the author:  See this Wikipedia article.

Staff of Pym's Publicity:
Others:

Synopsis:  Pym's Publicity is a busy advertising agency with a chaotic staff. Between floors is an iron spiral staircase, which some have always considered unsafe. Copy writer Victor Dean has just fallen down these stairs and died as the story begins, and Death Bredon is coming in as his replacement. Bredon is curious about the incident, and finding a note from Dean suggesting something is fishy at Pym's, leads him to suspect murder. He seeks to learn about it, and strikes up a friendship with Dean's sister, Pamela.

Through Pamela, Bredon is introducted to the drug party crowd of enchanting Dian de Momerie. Bredon attends a party in harlequin costume, and begins a teasing on-again, off-again relationship with de Momerie; always remaining in his costume to hide his identity. He becomes a legend, appearing without warning.

Bredon finds the connection between the party crowd and Pym's is the method of distributing drugs; which led to the murder of Dean, the man who knew too much.

A very nice page-turner, I did not mention Lord Peter in the synopsis as it would be a spoiler.

The sudden revelation of the identity of Death Bredon came as a surprise to me, I should have seen it coming.

The chaotic activities at Pym's are sometimes hard to follow, with a parade of every employee challenging the reader to keep track of who's who. The descriptions show some of the true absurdities of corporate life.

Much is made of the fact that Victor Dean did not relinquish his hold on a book during his fatal fall, yet this turned out to be a big red herring which never was brought up again.

The interplay of Bredon (as the harlequin) and Dian de Momerie is rather fairy-tale, especially the forest scene with him playing the pan pipes in a tree to Dian below. Dian becomes enchanted with this mysterious figure, reminding me of Luisa and the bandit El Gallo of The Fantasticks.

The chapter "Unexpected Conclusion of a Cricket Match" is a highly detailed play-by-play of the game, which didn't mean anything to me - not being familiar with the game - but the ending of the game did provide a plot element as a catalyst to wrap the story up.

The method the drug dealers use in dealing with security risks gets a bit repetitive, send them out on the sidewalk and a convenient truck jumps the sidewalk and runs over them (happens 3 times).

The denouement explains the involvement of Pym's and the drug trade, a clever little strategem involving the use of the advertisements themselves, a World War II -era espionage staple.

PS> If  you enjoy books set in advertising agencies, also try The Hand of Power by Edgar Wallace, which features Pawter's Publicity Services.

Also please see this review by Bev Hankins on My Reader's Block.
Posted by Rick Mills at 7:38 AM No comments: 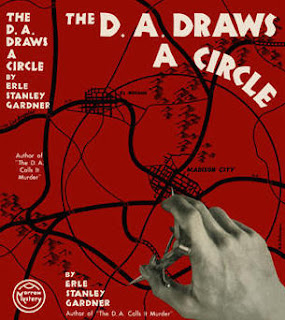 Posted by Rick Mills at 1:45 PM No comments: