The Killing of Judge Mac Farlane by Mary Plum (1930) 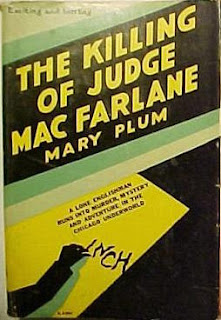 vintagemagazinesinVT
About the author: All I could find is this Goodreads list and this bibliography on classiccrimefiction.com.
Major characters:
Locale: Chicago
Synopsis: Gerland Louis Gilfillan Gillespie, "G", has moved from England to Chicago in search of adventure. He finds it when he opens his apartment to find a body on the floor, a knife in his neck, and wearing a knife-proof metal vest under his shirt. The dead man, a gangster identified as 'Brick' Carrio, had been scrawling something on the floor with his own blood, spelling out "INCH", the rest unreadable. When his name gets in the papers, G is invited to meet with Judge Mac Farlane, who is seeking information on the Chicago underworld. G meets with him, and is enchanted by his daughter Claire Mac Farlane. G returns to his apartment and is called upon by a man claiming to be the police fingerprint expert, who goes around the apartment ostensibly photographing fingerprints of the murderer, but in reality erasing them.
G and Tugs Schrader, a friend of the judge, go to visit the judge, but on the way find his body sprawled in the road - a setup waiting for the next car to come along and run over him, disguising the fact he was already dead. There is more drama at the judge's home: housekeeper Mrs. Downing has found out she is being cut of the judge's will, and parlor maid Lucy Miles is caught opening the judge's safe.
After breaking the news of the judge's death to Claire, G learns that Brick Carrio had been in the judge's house the night before, removing a confession from his safe.
Review: This story emphasizes the wisdom of the old rule - if you are going to cut someone out of your will, never, never, never tell them before you do it. This story kept me guessing. The victims are daisy-chained: A is dead, apparently by B. Now B is dead, apparently by C. Now C is dead .. and so on. A thoroughly enjoyable story with Chicago gangsters lurking around the edges, but never becoming a significant part of the story. I could not locate any biographical info on Mary Plum, and I could only find references to these other books:
Posted by Rick Mills at 9:58 AM