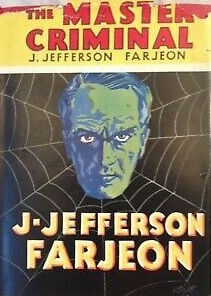 About the author:  J. Jefferson Farjeon worked for Amalgamated Press in London before going freelance. One of Farjeon's best known works was a 1925 play, Number 17, which was made into a number of films, including Number Seventeen (1932) directed by Alfred Hitchcock, and joined the UK Penguin Crime series as a novel in 1939. He also wrote the screenplay for Michael Powell's My Friend the King (1932) and provided the story for Bernard Vorhaus's The Ghost Camera (1933). Farjeon's crime novels were admired by Dorothy L. Sayers, who called him "unsurpassed for creepy skill in mysterious adventures." (from a Wikipedia article).
Major characters:
The criminal gang:
The others:
Locale: London and environs
Synopsis: John Mordaunt, alias Mr. Dicks, is the master criminal and leads a gang consisting of beautiful Beatrice Fuller and others. One of the gang - Baxter, alias A.P. Smith, was assigned to steal a valuble ruby from James Cardhew. The theft went bad. Cardhew was killed, then Baxter shot by the authorities, and the ruby lost somewhere.
John seeks out a fall guy to go search for and retrieve the ruby. The gang has a meeting and chooses an unkempt tramp who has been following John around. John and the tramp meet privately, and the tramp reveals himself to be John's brother, Geoffrey Mordaunt of Scotland Yard, in disguise. He had been following John in order to apprehend him. They wind up in a standoff, and John, seeing the inevitable, turns his gun on himself. Geoffrey quickly disguises himself as John, in order to infiltrate the gang and recover the ruby.
Review: Another good period mystery by J. Jefferson Farjeon. He employs his usual little tricks as people having multiple identities and disguises. As others have noted, he excelled in creating creepy, gloomy atmospheres. A couple of excerpts:

...added to these things was the strange atmosphere of the hosue itself, its haunting setting, and utter loneliness. Amid this wilderness of trees there should have been peace; and peace, in one sense, there was; but it was a brooding, malignant peace, throbbing with subconscious discord.

...he glanced out of the window. The velvet shadoes of the spires had by now licked their way right across the lawn below, and were pointing, like black arrows, into the bushes.

I enjoyed the part where Mordaunt escapes across a lake in a leaky boat, and walks through the dark forest in search of a woodcutter's hut for a shelter; bribing the woodcutter to not reveal his presence.

A cringeworthy part was a restaurant scene where no one wants to share a table with a Black man.

This title is available for Kindle.