The Case of the Musical Cow by Erle Stanley Gardner (1950) 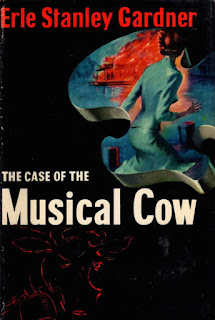 Synopsis: Vacationing Rob Trenton, Linda Carroll, and Frank and Marion Essex all sailed to Paris on the same ship. Rob has his eye on attractive Linda. Linda organizes a car tour (she had her car shipped with them) of Switzerland with Frank and Marion, and asks Rob to join them as a fourth to share expenses. Shortly into their tour, the Essex's are called home unexpectedly. Merton Ostrander, a fellow guest at an inn, fills in one of their spots. Ostrander is an avid collector of musical cow bells, and collects a number of them during the tour.

After the tour, things begin to go wrong. Rob falls ill with an intestinal complaint. He barely manages to make the ship and the four set sail back to the US. Rob's roommate is Harvey Richmond, who is very inquisitive about their movements. Merton Ostrander is seen dumping his precious cowbell collection over the side of the ship. Rob adopts a dog, Lobo, from fellow passenger Dr. Dixon.

After clearing customs in New York, Rob is driving Linda's car back for her. He discovers a cache of heroin hidden in the vehicle frame, and stashes it until he consults with Linda.

He goes to Linda's address to find a different woman who claims - and proves - that she is Linda Carroll, specifically Linda Mae Carroll; aunt to other Linda. A gang of drug smugglers steal the car in order to retrieve the drugs, find them gone, and then abduct Rob and demand to know what happened to the drugs. A shootout results in Rob being arrested and brought to trial.

This is one of the few non-series titles by Erle Stanley Gardner, and a nice treat from the usual California scenes. I was surprised by the number of story elements tossed in at the beginning, although a few of them are the requisite red herrings. For example, Frank and Marion Essex are prime characters right away, but then they are called home and never return to the story. Likewise, the two white capsule pills are a big deal at first, then they drop from the story but come back at the end with a brief innocent explanation.

It ends up with the usual courtroom scene, with a twist - our protagonist Rob Trenton discharges his public-defender attorney (in front of the jury - how embarassing) and conducts his own defense. If you enjoy Erle Stanley Gardner and are looking for something different in his works, this is a good choice. By the way, there is no cow in the story.