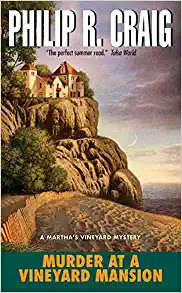 About the author: Philip R. Craig (1933 –2007) was a writer known for his Martha's Vineyard mysteries. He was born in Santa Monica and raised on a cattle ranch near Durango, Colorado. In 1951 he attended Boston University intending to become a minister, and got a degree in 1957. He taught English and Journalism at Endicott College in Beverly, Massachusetts from 1962 to 1965, and at Wheelock College in Boston until 1999, at which point he retired to become a full-time writer. (Wikipedia)
Major characters:
Locale: Martha's Vineyard (island), Massachusetts
Synopsis: The biggest news on Martha's Vineyard is a unknown vigilante, called 'The Silencer', who is on a crusade to destroy annoyingly-loud music speakers in cars and homes. Yes, it is illegal, but people secretly support his work.
Ron Pierson is building a giant showy residence, which locals sarcastically call 'Pierson's Palace'. Someone doesn't like it and has gone on a window-breaking spree. Pierson hires Ollie Mattes as a night watchman, but Mattes quickly falls (or was he pushed?) off the cliff to his death. Aristocratic matriarch Maud Mayhew approaches J.W. to establish that her son, Harold Hobbes, did not push him - because Harold admits to the window breaking which puts him high on the suspect list anyway. That doesn't last long, Hobbes is found dead in the driveway.
J. W. observes Cheryl Bradford hanging around the unfinished house, and has repeated interviews with her and her mother, Sarah Bradford. Both are horse lovers, and Sarah plays on a softball team for older women. Sarah's son is Ethan Bradford, a long-haired hermit, who meets visitors with a shotgun and threats; a strange retirement activity for a refined former electrical engineer who likes classical music.
Review: The murder mystery is very good. There are a small number of people in the story, and when the murderer - and the motive - is discovered, I realized the little clues that had been dropped here and there but it did come as a surprise.
However, the Silencer story line is rather sci-fi and on the unbelievable side - someone has a mysterious ray gun and goes around zapping sound systems, but somehow all the other electronics in the cars and houses are not affected? Details about how the zapping was done are not revealed. I could just see a big fat violation of Knox Commandment #4 coming .. ."No hitherto undiscovered poisons may be used, nor any appliance which will need a long scientific explanation at the end." Sure enough, we get the appliance and a long scientific explanation at the end. Perhaps it is included on a technicality as it is not the murder weapon, but just a gadget that annoys readers. The identity of the Silencer was clearly indicated as soon as the character was introduced and was no surprise.
The middle portion of the book deals with J.W. delving into the genealogy and relationships among the old-time local families. This does lay the groundwork for figuring out the killer at the end, so is essential, although I chose not to try to follow and comprehend the family trees presented.
Anita Pereira, a former lover of Hobbes, is a piece of work. She describes her open marriage  - oh, by the way, my husband has a new lover but I'm available at the moment - and comes on to J.W. repeatedly. When rebuffed, she just changes her pitch like any good salesperson: "Say, if you've not interested in sex with me, how about renting one of our horses and taking a couple of riding lessons?" Well, if you don't want the fish, how about the chicken?
Oh, another little annoyance is Craig's incorrect use of homophones. As in previous books, he uses "bridal path" instead of "bridle path", and "metal" instead of "mettle". Tsk, tsk. And he was a professor of English!
Overall, a good story which kept me turning pages. No need to follow the family trees unless you really want to map things out and try to identify the killer that way - which would be possible. Don't worry too much about The Silencer. And don't get involved with Anita Pereira. She's probably found someone else by now anyway.
Some nice extras:
Posted by Rick Mills at 11:06 AM