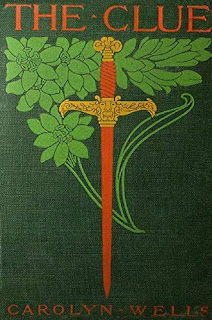 At age 22, Madeleine Van Norman has already inherited the vast Van Norman mansion, and is poised to marry very proper choice Schulyer Carleton. When she does, according to terms of  her late uncle Richard Van Norman's will, she will inherit his fortune - however, if she dies unmarried (just hours left!), the fortune instead goes to her distant cousin Tom Willard, who had been in love with her for years. So what does he love more - her or her money?

It is a moot question. She never makes it to her wedding, and is found stabbed to death the night before. Now Tom Willard inherits Richard's fortune. Next, the lawyer reads Madeleine's will! Surprise, she has left the mansion and grounds to Miss Elizabeth Morton; and she is not even related.

The only person who seems to have had opportunity to do the crime is the groom, Schulyer Carleton; but he lacks a motive. The person with the big fat motive, Tom Willard, was not present and thus lacks opportunity.

When a book starts out by describing the terms of a will (page 12), it becomes obvious a murder is in the making! The terms of the two wills are complex and worthy of a Perry Mason plot.

The ladies make a habit of fainting when asked tough questions. Of course, if I were as tightly corseted as these 1909 ladies, I would also.

This follows a standard Wells pattern: the amateur detective (Robert Fessenden) flails around for most of the book exploring different motive theories, and near the end, Fleming Stone pops in (at page 313!), takes a look around, and quickly pulls off the denouément. This reminds me of my dentist visits where the hygenist does 99.9% of the work, then the dentist pops in for a quick little peek at the end (which adds an additional charge to the bill, of course!)

The solution requires the reader to suspend disbelief on a couple of fronts. First, the murderer has a secret Santa Claus-type method of entering/exiting the house which is about as believable. Second, the murderer confesses, promptly stabs himself with the murder weapon, then casually dictates his will to his lawyer before popping off!

Overall, a nice period mystery until the strange solution is revealed.