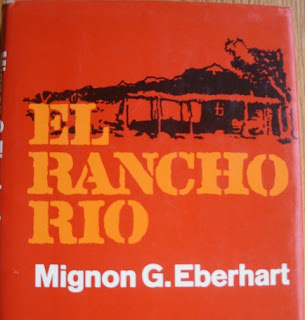 Synopsis: Craig and Mady Wilson, wealthy from mining discoveries, have a ranch, El Rancho Rio, in the Nevada desert. During his previous marriage to Rhoda Wilson, Craig and she had a daughter, now 12-year old Susan. Their marriage fell apart after Rhoda had an affair with Guy Casso. Craig had remarried, to our protagonist Mady Wilson.  One night Guy enters their home and assaults Mady, then runs away. The next day Mady is out riding and finds Casso's body in the desert, dead from being struck with a piece of souvenir railroad rail from their home. Indian Joe, Craig's assistant and confidante, is pressed into service as the de facto investigator.

Rhoda arrives with a deal for Mady - essentially to swap their men. Mady can have her former lover, Jim Marsh, back if she gives up Craig to Rhoda to remarry, so she (Rhoda) can again have custody of her daughter. Meanwhile a snowstorm comes in to trap the Wilsons along with Rhoda, Jim Marsh, Boyce and Edith Wilson, and lost stranger Walter Banner all in the same house - knowing one of them is a killer. And of course, the power goes out, and a gun is missing. (This is essentially the same plot setup as in Deep Lay the Dead by Frederick C. Davis.)

Edith Wilson mentions knowledge of Casso's killer, and she too is killed by someone on the ranch.

Review: Eberhart's stories are always enjoyable with the female protagonist who is always getting in trouble - as we follow her thoughts as she tries to get out of it. Eberhart excels in her place descriptions - this time the desert of Nevada (being from New England, this is a place I would not normally associate with snowstorms!). The desert locale is described almost as well as Erle Stanley Gardner. The character of Susan as a precocious 12-year old is well done and serves to move the plot along. Written in 1970, we see how far treatment of minorities in fiction had come (albeit with a long way still to go). Indian Joe (never dignified with a last name) is cast as Craig's confidante and our primary investigator. While some stereotypical language and mannerisms remain, it is also noted Joe has a Master's degree in Philosophy.