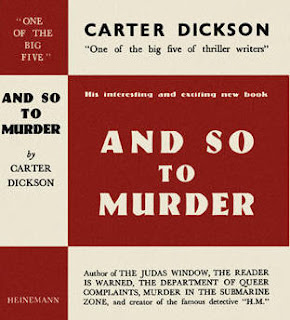 About the author: Carter Dickson is a pseudonym of John Dickson Carr.

Synopsis: Monica Stanton, daughter of a parson, has written a spicy book, Desire, which has become a best seller, and is now being made into a movie. She is hired by producer Thomas Hackett, assuming it is to work on the movie version. To her surprise, she is not assigned to write her own script, but instead a detective story by Bill Cartwright; who will, in turn, write her script.

She meets her idol Frances Fleur who will star in Desire. Everyone is on edge following a theft of acid, and its accidental spillage on a set. Then Monica is summoned to a deserted set where an attempt is made on her life using more acid; thwarted at the last moment by Bill Cartwright. Monica receives threatening letters as the pressure mounts. Who wants to kill her, and why?

Review: This is what you would get if Manning Coles wrote Sunset Boulevard. It is a slam-bang thriller (not a murder mystery, despite the title) featuring H.M., Sir Henry Merrivale. It begins with the young girl-next-door getting a job as a script writer at an exciting film studio and falling in love with another writer, our leading man. Then the mayhem begins: poisons, shootings, windows breaking, people thrown into the lake. Most of the legwork is done by our leading man Bill Cartwright, and he manages to pull H.M. in, unwillingly, toward the end. Unlike most of Carr/Dicksons, this one has no locked rooms; just a string of unsuccessful murder attempts. The descriptions of the studio workings are well done. An enjoyable page turner.