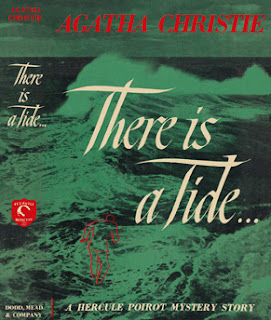 Synopsis: Wealthy, childless widower Gordon Cloade had always ensured his two brothers, one sister, and nephew they would be well taken care of when he died. Then he married a much younger woman, Rosaleen Hunter Underhay, widow of Robert Underhay, believed dead in Africa. Not long after the marriage, Gordon is killed in the London blitz bombing.

Now the Cloades: doctor Lionel Cloade, lawyer Jeremy Cloade, farmer Rowley Cloade, and Adela Marchmont are in an awkward position. All struggling financially, they had placed their hopes in a large inheritance. But now Rosaleen is his only heir; and she is burning through the fortune with her wild and crazy brother David Hunter.

Enoch Arden shows up with a blackmail offer: How much is it worth to the Cloades for proof Robert Underhay is still alive? If he is, Rosaleen's subsequent marriage to Gordon is invalid, and the Cloade brothers are again heirs. This is worth quite a bit. On the other hand, how much is it worth to Rosaleen's scheming brother David Hunter not to reveal the information, since it would cut off his source of money? Place your bids. A dangerous game - Enoch Arden is found dead in his hotel room with no leads as to Robert Underhay at all. Suspicions are aroused that Enoch Arden is not his real name, as it is really the name of a poem by Alfred, Lord Tennyson which has a similar plot. But who is he?

Hercule Poirot visits to investigate a murder in which everyone has a motive.

Review: A very tight Rubik's Cube of a novel. Each person has a motive for murder and they all interlock. One interesting plot element is the path of inheritence depending who dies in what order. Several twists and turns occur with a big surprise at the end. I had a bit of trouble figuring the family relationships out, with one enigma remaining: If Rowley is Gordon's nephew, who are his parents? Not Jeremy and Frances, it is stated they had only one child (Anthony) who was killed in the war. Not Lionel and Kathie, since he refers to her as his aunt. Not widowed Adela, since he is engaged to her daughter (who would then be his sister). Not essential to the plot, but still a naggy loose end.