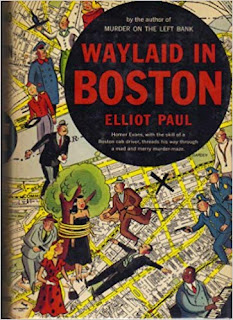 About the author:  Elliot Harold Paul (1891-1958), was an American journalist and author. Here is a Wikipedia article about him.

Synopsis: Biblio.com states "Paul, the author of "The Last Time I Saw Paris," also wrote a series of humorous mystery novels featuring a pair of intrepid private detectives, Homer Evans and Finky Maguire. This, the tenth book in the series, is set in Boston, where Homer, consulting with a botanist in order to complete his research on meat-eating plants and Oriental poisons, is suddenly chasing one murderer, or is it two?"

Boston natives Homer Evans and Finky Maguire stop in to the Lantern Room lounge of the Dorsetshire Hotel for a drink. Music is provided by pianist Jellyroll Morton. Evans' friends, Angus Ferguson and Leverett Bengay stop in. Together they discuss a magazine article about the challenges of detectives shadowing subjects, and this leads to a bet: can one of them follow a complete stranger for 48 hours, and learn enough about the subject to compile a report? Canadian Solange de Lassigny joins the group, and the bet.

The bet is agreed upon. Jellyroll Morton will select the stranger. He selects a man sitting in the bar, name unknown, his only distinguishing characteristic being a pointed nose; so for lack of a name, he is referred to as "the pointed-face man". Leverett Bengay will be the follower.

As soon as the subject leaves the bar, Bengay follows. At the same time, Angus Ferguson disappears. The subject is found to be Blaise Laneer, a bank clerk, who then is murdered in his apartment at 14 Newbury Street, across the street from the hotel. While investigating that murder, Dr. Rodolpho Gonzalez is poisoned. It becomes clear there is an Argentinian connection to the murders. The action moves to the Arnold Arboretum where Homer exposes the murderer.

Humorous murder mysteries are hard to pull off, but this one works. Homer Evans has minimal appearances, and Finky Maguire does all the legwork. Nonstop action with a large cast of colorful characters, in the style of Manning Coles. It was bit difficult keeping track of the names even while documenting them above. Persons familiar with Boston will enjoy the familiar places around town where the action occurs. The final scene in Arnold Arboretum was both humorous and cringe-worthy at the same time, an odd feeling! This was my first Elliot Paul book, and I will look for more.

If you enjoy mysteries set in Boston, also see They're Going to Kill Me by Kathleen Moore Knight.