The Perfect Crime by Ellery Queen (1942) 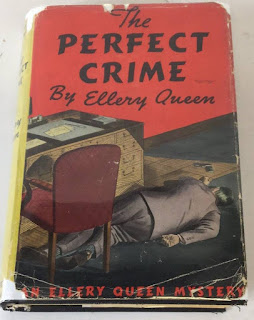 Raymond Garten, now broke, is forced to auction his beloved rare book collection. Altruistic Walter has an idea: He gives Ellery $250k to purchase the collection for him as a third-party, so Raymond will be unaware Walter is the buyer. He plans to give it to Marian as a wedding gift, so that it will stay in the Garten family and Raymond will be unable to refuse it. Ellery buys the lot and moves it to Walter's home; next door to the Mathews home.

No sooner has this been accomplished than John Mathews is found dead in his study.

This book is prefaced with "Based on the Columbia Motion Picture Ellery Queen and the Perfect Crime", an ominous admission that it was back-written from the movie - generally a bad sign, and one that the Queen authors (Frederic Dannay and Manfred Bennington Lee) had little to do with writing it. Eye-rolling continued when I find that one of the characters is a chimpanzee who has been taught how to shoot a gun (thought this sort of thing went out with Poe's Murders in the Rue Morgue).

However, I was pleasantly surprised to find a respectable, concise plot; in the same vein as Queen's country-titled novels of the same era (Chinese Orange, French Powder, etc). My 1942 Grosset & Dunlap edition has a sketch map of the crime scene in Chapter 6 (p. 75), which is essential if you wish to figure out how the murder occurred, and careful study of the map itself may provide the answer for you.

A rather humorous aside is the conversations in which the investigators speculate 1). does a chimpanzee have fingerprints, and 2). if so, is it possible to take them?