From This Dark Stairway by Mignon G. Eberhart (1931) 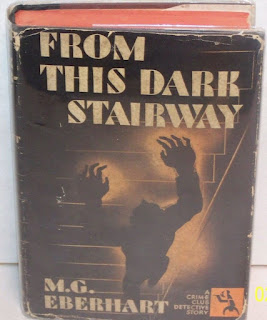 Hospital staff:
The patients:
*hospital seems to have a low threshold for admissions - gotta keep those beds filled!

Locale: somewhere in the midwest

Synopsis: It is a hot, sultry night in Melady Memorial Hospital. Nurse Sarah Keate is in charge of patient Peter Melady, grandson of the founder, hospitalized and scheduled for an operation by Dr. Harrigan the following morning. He is rather irascible, smoking cigars in bed, and sending Nurse Keate to his home to retrieve his favorite little blue snuff bottle.

Nurse Keate returns from break to find, her surprise, her patient is gone. The nurse on duty reports Dr. Harrigan had come in, and decided that Melady's operation needed to be done immediately. Nurse Keate goes to the operating room, but no one is there. Melady cannot be found, and she discovers Dr. Harrigan murdered, in the elevator. Suspicion points first to the missing Peter Melady, then to architect Kenwood Ladd, who spends a lot of time visiting now-widowed Ina Harrigan.

During the investigation, someone attempts to strangle Dione Melady, she survives. It becomes apparent the blue snuff bottle is the key to the mystery, but it cannot be found.

After the police arrest a suspect, Lieutenant Lance O'Leary (secret love interest of Sarah Keate) arrives and they collaborate on finding the killer.

This, as well as the other Sarah Keates, give us a view of healthcare in the 1930's and makes us appreciate our high premiums today! We are guests of a hospital without air conditioning, having flying insects, gender stereotypes [doctors are male, nurses are female], surgery using an Ether cone, and a rather nostalgic world where nurses wear starched white uniforms, caps, and white stockings which whisper when they walk. Makes the ugly scrubs of today downright appalling.

If you read the Sarah Keate series for the appearance of Lance O'Leary, you may be disappointed. He does not show up until the very end after Sarah Keate has done all the work.

A troubling aspect of this title is the one African-American who plays a key role in the story, is only referred to as "the Negro" and denied the dignity of a name. He also suffers the stigma of being a case in the Charity Ward. Certainly a reflection of the 1930's. Caution: the N-word appears once in a conversation.

As far as the mystery goes, it is a guesser right up to the abrupt end, the last two words of the book being the name of the murderer.