Murder in the Rain by Wilson Collison (1929) 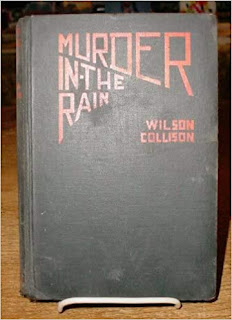 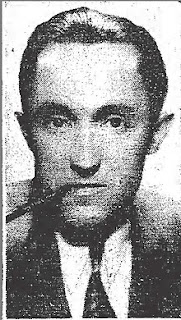 
About the author: Wilson Collison (1893-1941) abandoned plans to become a scientist when he found he preferred writing. He was nine when a Columbus newspaper accepted one of his stories. His writing was largely self-developed, as he completed only one year of high school. He worked as a printer, a stenographer, an advertising writer, and as a clerk in the wholesale and retail drug business. (excerpt from wikipedia article)

Synopsis: Our narrator, Richard "Dick" Trent, Assistant District Attorney for New York, sends his wife off on vacation to California. While she is gone, he keeps platonic company with friend Molly Vane, an elegant, pushy theatre news reporter in the style of Brenda Starr. They attend a theatre opening starring Barry Maldon, latest heart-throb actor. The next morning, Maldon is found stabbed to death in his apartment. Trent is placed in charge of the investigation, and Vane worms her way in, citing her knowledge of theatre circles.

The investigation becomes an analysis of people moving in and out over the murder scene over a period of time, and witnesses' stories are compared. Meanwhile, Molly Vane pursues her own path outside of the authorities, to identify the killer and the unusual technique.

The novel is prefaced with both a "foreword" and a "reviser's note" which seek to drum up excitement about the spectacular, unique crime and and its solution.

This is a tight novel, with a very small cast of characters, deeply intertwined. I was tempted to chart out the people's movements over time, as this could have graphically led to the killer - but I did not and let the novel take its course.

Molly Vane pops in at the dénouement and presents the full reveal - including much information which had not been shared earlier - a bit of unfairness to the reader.