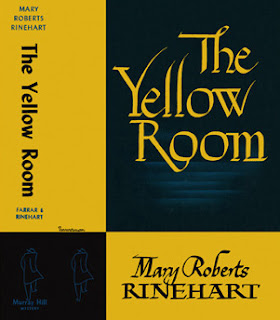 Locals:
The Hilliards, of Providence:
Characters deceased before the story begins:
Locale: Crestview, the Spencer's summer home in Maine

Carol Spencer, her mother, Mrs. Spencer, and three maids Maggie, Nora, and Freda travel to Maine to open their summer home, Crestview,  for an expected visit by her brother Greg, coming home on leave from the South Pacific during WWII.

Crestview, is much too large for them now, and has been neglected during the war. They arrive to find it empty, but with signs of recent habitation. They find that Joe and Lucy Norton, the caretakers, are both hospitalized - Joe with appendicitis, Lucy with a broken leg. Lucy tells a story of being grabbed in the night by a stranger, resulting in her falling down the stairs. The locals refer to this stranger as "Lucy's ghost".

Carol and the maids work on opening the house. They find two unpleasant surprises: a woman's dead body in the linen closet, with remnants of a fire; and evidence that someone has been sleeping in the "Yellow Room". The dead woman's clothing and effects are missing from the home.

Jerry Dane, on medical leave from the Army, serves as the investigator. Exactly what his military role was is not revealed, but hinted he was in Intelligence.

Carol's wealthy sister, Elinor Hilliard, arrives for the inquest. Lucy Norton dies while in the hospital, and can not provide any information about the dead woman. A fire on the hillside above the home burns the area, and possible the dead woman's clothing, which had been suspected buried there. While out in the burned area, Elinor is injured by a gunshot.

Being one of Mary Roberts Rinehart's later mysteries, her earlier dated "had I but known" pattern of foreshadowing references has been left behind, as this takes the form of a classic golden age mystery. It is a good page-turner, with the culprit and motive a surprise until the last few pages. The last chapter kept me alert as various teasers pointed at different culprits before settling on the real one.

Set during WWII, the military is well represented with the few men in the story having cover stories of being on medical leave, to explain their presence in Maine despite the war being underway. I kept wondering when Jerry Dane's background and authority as the investigator would be revealed, but this did not occur.

This is a great country house mystery, complete with the requisite staff of servants lurking around. Rinehart plays fair with the reader as the mystery comes to a satisfying close.