The Red Mass by Valentine Williams (1925) 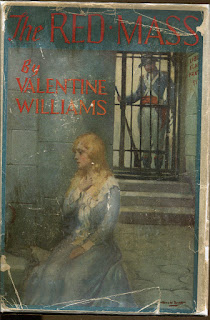 My copy does not have a dust jacket, but this photo is from an eBay listing by seller departedbooks.

It is two years into the French Revolution. Lt. Hector Fotheringay of the British Third Guards leads an idle life in England. He is in love with Lady Betty Marchmont, but there is a problem. He has lots of debts and only a small annual allowance of £200. Under the terms of his late father's will, he will come into his inheritance only when he marries, so he needs a wife.

One night in a tavern, he hears Betty's name being bantered about, and promptly throws his drink into the man's face, not recognizing him as the Prince of Wales - an unheard of affront. His military career is immediately in jeopardy as he is arrested.

A Mr. Gray offers him a deal: if he will perform a secret mission in France, Mr. Gray can get his action forgiven. Fotheringay accepts. As he is fluent in French, he is told to impersonate a French citizen, Jean-François Charpentier and meet with a certain Engstrom in Paris.

Hector travels to Paris, where the revolutionaries are in charge and the aristocrats are being sent to the guillotine every day. He passes the inspection of  Citizen Commissary Grand-Duc, (a hunchback). He then finds Engstrom has already been executed. Wearing the distinctive tricolor cockade ribbon to show his [assumed] allegiance, he takes a position as a spy for the disabled revolutionary Citizen Couthon, During his search for his contact, he meets and falls in love (#2) with a young Parisian girl, Loison Mallet.

Having read about a dozen of Valentine Williams' books, I expected this to be his usual murder mystery set in the period following WWI. I was quite wrong. This book was a complete and exciting surprise.

If you enjoyed Les Misérables, you will love this book. It features many of the same themes: assumed identities in Paris during the period of the French Revolution, love interest in a poor Parisian woman, and political skullduggery.

Just listen to the opening of Chapter X. Can you hear the people sing?


A basic knowledge of French is helpful to follow this book, as occasional passages are rendered in that language.

Do you have this book? One page is missing in mine! I do not have page 3/4, so I may be missing the very beginning of the story! The first sentence I have (on p.5) is "May was approaching its close." If you have a previous page of text, would you be kind enough to photograph/copy it, and send it to me?

Dec 8 2019: Dan Magnuson of MLC Books, Northfield MN, was kind enough to send me photos of the pages I am missing - many thanks!