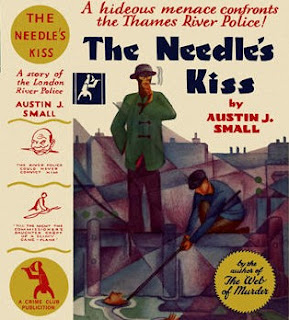 About the author: Austin J. Small (1894-1929), UK adventure and thriller author. In the US he published under his own name, while in the UK his books usually appeared as by Seamark. He wrote three novels of science fiction: The Man They Couldn't Arrest (1925) is a mystery novel incorporating unusual devices and inventions into the plot. In Master Vorst / The Death Maker (1926) the London Secret Society's insane plan to kill off the human race by germ warfare is thwarted in the nick of time. The Avenging Ray (1930), as by Seamark, features a Mad Scientist intent upon destroying the world (http://www.sf-encyclopedia.com/)
Major characters:

Toby Essex and Hilary Kittridge are aboard the Spindrift as they observe the Thames River Police fish a body out of the river, while the Chinaman Grosman watches them and makes threatening gestures from the freighter Yangtse. The body is later identified as Gilan Maxick, and the cause of death is a Chinese dagger tipped with poison.

Manning and Proctor of the Thames River Police are being pressured to find the source of cocaine being smuggled into London via the river. Grosman is their prime suspect, but they have no evidence.

Hilary Kittridge, daughter of the newly appointed Police Commissioner, visits a local night club with her brother, Johnny Kittridge. She is an adventurer, and decides to board the Yangtse to see if she can find evidence linking Grosman to the murder, but she is caught and held captive aboard ship. Grosman seeks to control her by forcibly addicting her to cocaine. Meanwhile, Manning manages to turn Erich Maxich, brother of the dead man, to provide evidence.

Dark foggy nights along the Thames River? Perfect setting for a murder mystery, what? As Chapter 1 opens: "Dank river smells, cold and clammy, and as transient as the dawn itself, hung faintly on the air and fused into the sharp tang of the mist wraiths that swirled about likes wisps of torn gossamer above the fast-running tide." Makes "It was a dark and stormy night" look like a Kindergarten exercise.

This is more a police procedural than a mystery - the culprits are known right away, and the action focuses on finding evidence to make an arrest. Hilary Kittridge is a Nancy Drew-like adventurer, lurking around the docks in evening dress and heels with her trusty flashlight, investigating on her own and winding up in big trouble.

The details of the cocaine trade are detailed and could be taken from today's news. The descriptions of reactions to cocaine, and its withdrawal, are very specific and scary.

One chapter seems a bit theatrical as a dying stabbing victim repeatedly gets up to argue the entire case with his assailants. After Hilary is kidnapped, she disappears from the narrative for many chapters, leading us to wonder what happened to her. Not to fear, she eventually reappears.

All in all, excellent scenes and descriptions.