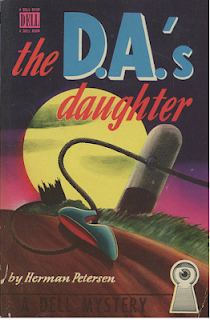 About the author: Petersen was born in Utica, New York on September 9, 1893; he sold his first story, “ The seven gilded balls, ” to Black Mask in June 1922. Petersen's best times in the pulp business were between 1922-33; Petersen did not depend on the pulps for his livelihood, as he worked for Utica newspapers and in 1943 became a fourth-class postmaster for Poolville, New York; he sold his first full length mystery novel, Murder in the Making, in 1940; other novels include Murder R.F.D., Old Bones, and The D.A.'s Daughter; he also published a humorous autobiography titled, Country Chronicle (1945); his historical novel, The Covered Bridge (1950), was later adapted for television and aired in 1952; his final mystery novel was The House in the Wilderness (1957) Petersen died July 1973. Source: Online Archive of California. Mysteryfile.com adds "Petersen’s only other mystery novel, “The House in the Wilderness,” was published serially in 1957 and did not see book publication."

About this title: This is also published as Dell Mapback #55. I have three books by Herman Petersen (my other two are Murder RFD and Old Bones). The spelling of his name is Petersen on two, and Peterson on the other, 'Petersen' is correct. If you search for his books, try both spellings. He also wrote Murder in the Making which I have yet to locate at an affordable price.

As this enjoyable book takes place in the countryside during haying season, it has been my tradition* to reread it every summer here as soon as the first hay is being cut. This summer (2018) will be my 11th reading! 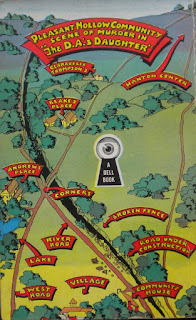 Hank Wilbur, our narrator, is selling life insurance to pay for college in the fall. He has become quite cozy with blonde widow Sara Andrews, hanging out with her and giving her swimming lessons. Since the death of her husband Charles Andrews, local lug Big Joe Hustin has taken it upon himself to be Sara's protector, and slugs any men who show interest in her.

Sara drives home alone after a community supper. Later, Hank and girl-next-door Lydia Bannock drive the same way, to find a broken guard rail, and Sara's car overturned in the river. Hank dives in to try to assist, but she is already dead. Police find a skid mark indicating the car's brakes have been tampered with. She had just purchased a $100,000 life insurance policy from Hank - with Avery Hayden as beneficiary. This is a A-1 motive for murder, but just who is Avery Hayden? Turns out he is a inmate of Sing Sing, serving a life sentence - a watertight (forgive the water reference) alibi.

Hank and Lydia try to find the motive, and narrow down the suspects. Lydia, with her exposure to her D.A. father, leads the way as Hank tries to keep up.

"Let's drive around the square," Lydia suggested. "I need a breath of night air."
"What have you been breathing since sundown?"

Trooper Nolan: "What'd he [Charles Andrews] die of?
Hank: "I think it was his heart."

This is one of the most enjoyable books I have encountered (having read it 11 times). Herman Petersen was a master of perfect, musical sentence construction ("Peaceful was the countryside over which the shadows of evening grew long.") and irony - too bad he only authored four books; of which I have obtained three.

The scene of the sleepy rural village is well portrayed. Petersen was a rural letter carrier in upstate New York, and perfectly captures the countryside.

There are hints of a potential relationship building between 21-year old** Hank and 36-year old Sara - today she would termed a "cougar". It is a surprise when she turns out to be the victim early on. There are also hints that Lydia has her eye on Hank as well. The repartee between them is enjoyable.

This is a perfect book for summer reading in a hammock, with the sound of a tractor cutting hay in a nearby field.

*My other seasonal reading tradition is to read Deep Lay the Dead by Frederick C. Davis during a blizzard, as it takes place in a country house being buried in snow.

**inferred - Sara states she is 36 when making the insurance application, and Lydia mentions that Sara is 15 years older than Hank.
Posted by Rick Mills at 1:26 PM