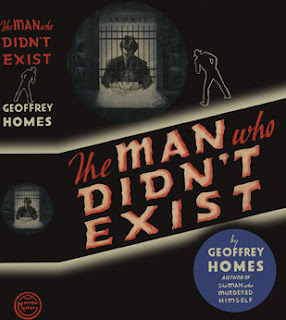 dustjackets.com
About the author: Geoffrey Homes was a pseudonym for Daniel Mainwaring (1902-1977), an American novelist and screenwriter. He was born in California, and attended Fresno University. He held various jobs, including migrant fruit picker, private investigator and reporter, before turning to writing in the thirties. He subsequently became a screenwriter for movies. Homes's series characters were Jose Manuel Madero, LA reporter Robin Bishop and PI Humphrey Campbell. Bishop eventually marries Mary Huston, a secretary at the Morgan Missing Persons Bureau detective agency.
Major characters:
Locale: Los Angeles area
Synopsis: Newspaper reporter Robin Bishop is taking in an evening's entertainment at a seashore casino with his wife, Mary. He steps out onto the beach and finds a jacket folded neatly, with a note pinned to it. The note is a suicide note, signed by Zenophen Zwick.
If this is true, it will be a nationwide sensation. Zenophen Zwick is the country's foremost mystery writer. It is known to be a pseudonym, and no one knows his actual name. Bishop and City Editor George Clark begin putting together the story, although a bit suspicious that it could just be a publicity stunt. Although no one knows who Zwick is, most concur he is likely one of the following:
Mary Bishop (Robin's wife) takes it upon herself to read everything by the other writers to determine if one of them is really Zwick. Bishop finds the post office box where Zwick receives his mail under the name William Nye. The mail clerk, Gordon McHaig, states he has seen him and can identify him. Bishop publishes a photo of McHaig in his story, stating that McHaig is the only person who has seen Zwick. That night a visitor to McHaig's home shoots him dead. The search for Zwick's body stops immediately and a warrant is issued for his arrest.
Review: I always enjoy stories where the investigator is a newspaper reporter, and the story includes scenes inside the newspaper offices - back in the day when they were a chaotic frenzy as competing papers fought it out on the streets in alternate editions. (I especially like those by Nancy Barr Mavity.) This one is no exception. The writer brings his previous real-life reporter experience to the story.
I had forgotten that some newspapers used to print two editions per day - the evening edition and a morning "sports" edition (with the previous night's scores), which was even printed on different colored paper!
The story builds nicely, especially with the introduction of the tall mysterious woman (note: mysterious women are always tall). A most interesting character is Peter's wife, Mary, becoming the quiet-behind-the-scenes research investigator as she peruses books by Zwick, Grove, Turner, and Sidney to discover leads to Zwick's identity, and the murderer.
The trash-talk between the reporters and detective Hallam Taylor is priceless!
Posted by Rick Mills at 1:59 PM