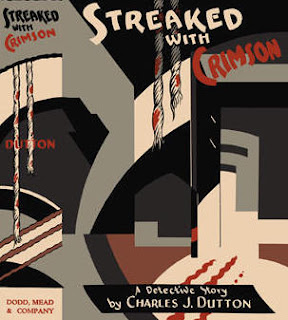 dustjackets.com
About the author: Charles J. Dutton (1888-1964), mystery writer and minister, was educated at Brown University, Albany Law School and Defiance Theological Seminary.  He lived in New England (where many of his books are set) and later settled in Iowa. (from gadetection)
Major characters:
Locale: The coast of Rhode Island or Connecticut (not specified)
Synopsis: Harley Manners, Professor of Abnormal Psychology, is motoring to the coast to visit with his old friend George Carter, and meet criminologist John Bartley. He takes a shortcut and winds up lost in the fog. He stops at the first house he comes to - a dark, apparently deserted mansion - the "old Wilson house". He finds the front door ajar, walks in, and discovers the body of a man hanging in a room, his wrists tied behind him. Looks like murder. He leaves, finds his way to his friend's house and reports the discovery.
James Rogan, Chief of Police, responds and they go to the scene. They find the rope hanging, but the body is gone and cannot be located. The rope is covered in black pitch with a crimson mark every few feet. Returning to the police station, a Mr. Robb arrives to report his employer, Paul Mason, publisher of a financial report newsletter, did not show up for the sailing of his yacht.
Rogan, Manners, and Carter return in daylight to thoroughly search the mansion. Manners goes to the attic and roof and tangles with a man who escapes. The body they sought is found on the roof and identified as Mason. A room in the house shows signs of feminine occupancy, and it is believed Mason had been meeting a woman there for trysts.
Busybody librarian Abigail Tripp keeps a close eye on her neighbors from behind her curtains. She sees Richard Rand and his wife Molly Rand having an argument. She disapproves of Molly, a tease with her short skirts and shiny silk stockings. Then Molly is no longer seen. Abigail goes over to spy and finds Molly's body hanging with a rope similar to that used on Mason. The next house on the dead-end street after the Rand cottage belongs to lawyer Henry Albert.
Review:
The opening chapters describe driving through thick fog at night, and are very descriptive and enjoyable and place the reader right into the scene. They are well done and reminded me of the opening of Deep Lay the Dead by Frederick C. Davis (1942) in which another professor is having a bad drive, but through a snowstorm.
The opening setup is a bit predictable, though: Manners gets lost in the fog at night. (I thought: He will stop at a creepy mansion.) He stops at a creepy mansion. Manners enters the mansion. (I thought: He will find a body.) He finds a body. Manners goes and gets the police. (I thought: The body will have disappeared.) The body has disappeared.
Much ado is made about the rope used, black from being coated with pitch, with red paint marks at intervals. I was sure it would turn out to be a line from a boat (since we are on the coast), pitch-covered for waterproofing, marked at intervals to take soundings (depth measurements). But I was wrong. In fact, not much explanation is given about the strange rope except that the murderer preferred it.
The most enjoyable character is librarian Abigail Tripp, and how she sniffs at anything the least bit improper, all the while spying on her neighbors.
There are many academic allusions to sexual deviations, pornography, and sadism leading to the murders, although being 1929, nothing is explicitly stated.
Posted by Rick Mills at 3:59 PM