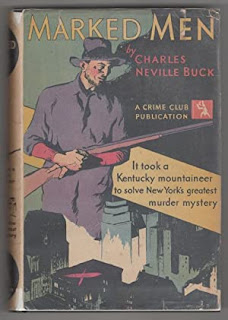 AbeBooks
About the author: Charles Neville Buck (1879 - ?) was an American writer who had many of his novels staged in theater productions and adapted into films during the silent film era.  His work includes yarns about the mountain men of Kentucky and their traditions. He worked for a year as a cartoonist and then for about a decade as reporter in Kentucky. Buck also published under the pseudonym Hugh Lundsford. (wikipedia)
Major characters:
Locale: New York City and Kentucky
Synopsis: The Sportsman's Club is an exclusive New York club for millionaires. They are in the process of relocating to a new building, and several of the members decide to run out the clock on the lease of the old space, remaining until the very last minute as movers take the last furnishings from the building.
Club member Clem W. Archibald is just coming down the stairway when he falls to the bottom. Attorney J. G. Smith and other members go to his aid to discover he has been shot. He dies before he can say what happened.
A young woman comes to see Inspector Crandall about the murder. She is Millicent Jasper, an actress (Jasper is her stage name, Crenshaw her real name). She reveals she is Archibald's fiancée, and he has been supporting her and backing the play in which she is appearing.
Some local civic leaders approach J. G. Smith and urge him to take on an investigation to find the killer, and he reluctantly agrees.
Flamboyant actor Dawes Fleetwell calls on his agent only to find the play he was scheduled for has been cancelled due to backer Archibald's death. The story then changes to Fleetwell's history in Kentucky. Fleetwell and Muir Bratchell had been competing for Felicity Cawdon's hand, and Fleetwell stole her away from Muir. Dawes took her to New York.
J. G. Smith is looking for an agent for his development business in Kentucky, and comes across now-attorney Muir. He hires him and brings him to New York, where he encounters Dawes and Felicity again, in a strained but polite meeting. Meanwhile, crime runs rampant in New York, with several more murders occuring. The police seek Dawes' assistance in sorting out the shootings, as Dawes has backcountry gun experience.
Review: The story starts out strong but takes an abrupt turn when switching to the back story of Dawes Fleetwell. The account of his upbringing in Kentucky goes on much too long (three chapters). I started wondering if I was indeed reading the same book I had started. Buck mostly wrote stories about rural Kentucky, and I began wondering if this New York murder mystery was just an excuse to get another Kentucky tale into print. To make things worse, the dialog in the Kentucky portion is rendered in hard-to-comprehend phonetic dialect: "Hit come on like a hurricane an hit jest pint blank swep' everything afore hit. We rassled with ther gal in sperit. We argyfied thet leastways she a bound ter wait an talk with you fust."
At that point I considered pulling the plug and doing a rare DNF (Did Not Finish). We had a murder, but no suspects, no weapon, no motive, no progress, and the story went and got bogged down in a drawn-out love triangle in the Kentucky hills. Then the love triangle moved to New York to be continued there.
The story flipped between New York and Kentucky several times, and this was distracting. Clem Archibald's murder was forgotten until the very end, when the murderer is revealed to be a character only introduced in the final pages.
Posted by Rick Mills at 8:02 PM