The Gaol Breaker (US title) / We Shall See! (UK title) 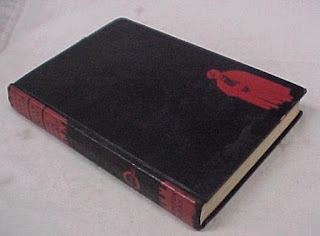 abebooks
About the author: Richard Horatio Edgar Wallace (1875-1932) was a prolific British crime writer, journalist and playwright, who wrote 175 novels, 24 plays, and countless articles in newspapers and journals (Goodreads). In terms of production, by cranking out one novel per month, he was the British equivalent of Erle Stanley Gardner. See this Wikipedia article.

Edgar Wallace
Major characters:
Locale: England, Monaco, and France
Synopsis: Detective Sergeant Mont (our narrator) is on vacation from Scotland Yard. He visits his old friend Billington "Billy" Stabbat, a private investigator. Billy is not really cut out for the business - he is an old softie, especially for the ladies; so he has operative Levy Jones do most of his legwork.
Man-about-town Thomson Dawkes is puzzled by a young woman he encounters in Monte Carlo. Calling herself "Miss X" or "Miss Hicks" (as 'X' is pronounced in French), she gambles large sums while referring to written notes, obviously some sort of system. She wins substantially more than she loses. He tries to make her acquaintance but is repeatedly rebuffed. When Dawkes encounters her in London, he hires Billy Stabbat to find out about her and her system. This leads to an encounter in Billy's office, in which Dawkes advances on her and she shoots him - seriously injuring him. Billy, trying to protect her, "confesses" to the shooting himself.
The investigation reveals she is Mary Ferrera, a clerk at Frampton's Bank in Elston. She is also the niece of bank owner Sir Philip Frampton. It is suspected Frampton has cooked up a gambling system and employs Mary to work the gaming tables. At a meeting - again at Billy's office - Mary and Frampton are left alone, and Frampton is found shot to death. Meanwhile Billy stands trial for Dawkes' shooting and is sent to prison for seven years.
Mont and Levy find the Mary's gun - still fully loaded - and deduce she was not the shooter of Dawkes and Frampton. Confounded, they plot to spring Stabbat from Dartmoor prison so he can solve the case.
Review:

Won't these P.I.s ever learn to not leave adversaries together unsupervised? The first time a client gets shot and wounded, and then they go right ahead and set it up again, this time with a client getting killed. Oh well, leaving the two shootings a mystery to the reader is the plot, as the reader is not privy to what really occurred in the room each time.

Stabbat is exactly the wrong type to be a P.I., constantly getting personally involved with clients and acting out of sympathy to them. However, this makes a good story line as he delegates most of the client contact to Levy.

Levy is an orthodox Jew and is constantly telling self-deprecating jokes and amusing (but stereotypical) stories about Jews, which is unnecessary and detracts from the story line. That aside, he makes a good Archie Goodwin to Stabbat.

The jail break episode is unique and amusing and worthy of a Manning Coles.

*The date 1924 is uncertain. My copy is an omnibus (The Mammoth Mystery Book), and it unclear which story has which publication date.