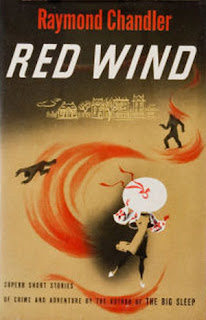 This review is only about the short story "Red Wind". (There is a collection of his short stories bearing the same title).
About the author: Raymond Chandler (1888 – 1959) was an American-British novelist and screenwriter. He is a founder of the hard-boiled school of detective fiction. The protagonist of his novels, Philip Marlowe, like Hammett's Sam Spade, is considered by some to be synonymous with "private detective". Both were played in films by Humphrey Bogart, whom many consider to be the quintessential Marlowe. (wikipedia).
Major characters:
Locale: Los Angeles, California
Synopsis: The hot, dry Santa Ana "red winds" are blowing. Private Investigator Philip Marlowe is having a drink in the bar across from his apartment house, and talking with 'young kid' bartender Lew Petrolle. A man comes in looking for a lady, who he describes precisely. As he leaves, a "drunk" (Al Tessillore) at the bar shoots him dead, calling him "Waldo".
After the authorities come, Marlowe returns to his apartment house and encounters a woman matching Waldo's description, Lola Barsaly. She identifies Waldo as Joseph Coates, who had stolen her expensive string of pearls. She gets Marlowe to enter Coates' apartment to retrieve the pearls - instead he finds a dead man, croupier Leon Valesanos, hanging from the Murphy bed frame. Marlowe takes his Valensano's keys and locates his car outside, and goes to a found address to find Frank Barsaly with his kept Russian woman, Eugénie Kolchenko. Barsaly reveals the motives while holding a gun on Marlowe.
Marlowe works out a tough deal with police detectives Sam Copernick and --- Ybarra to recover the pearls, protect their sources, and close the case.
Review: This is the story with famous opening line describing the hot, airless desert night: "On nights like that ... meek little wives feel the edge of the carving knife and study their husbands' necks. Anything can happen." The reader will be reaching for the A/C as Chandler's setting is described.
The short story format is perfect for the hard-boiled genre. The reader gets beat up along with the characters in longer outings. There are quite a few characters in this short work, and their relationships are not always clear until late in the tale. The wistful ending is a bit of a surprise. One loose end: where did the real pearls go?
Posted by Rick Mills at 12:36 PM