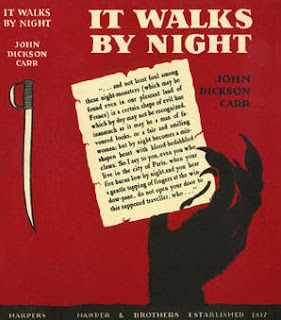 dustjackets.com
About the author: John Dickson Carr (1906 – 1977) was an American author, who also published using the pseudonyms Carter Dickson, Carr Dickson, and Roger Fairbairn. He lived in England for a number of years, and is often grouped among "British-style" mystery writers. Most (though not all) of his novels had English settings, especially country villages and estates, and English characters. His two best-known fictional detectives (Dr. Gideon Fell and Sir Henry Merrivale) were both English. (excerpt from this Wikipedia article.)
Major characters:
Locale: Paris
Synopsis: The police are on the lookout for Alexandre Laurent. He was married to Louise Laurent, the marriage ending in divorce over his erractic behaviour and fixation in killing. He had plastic surgery done to disguise his appearance by a Dr. Rothswold, and killed him for his trouble. No one is quite sure what he looks like now.
Laurent has been stalking Louise. He claims the ability to enter buildings unseen. She marries Raoul Jourdain, 6th Duc de Saligny. On their wedding night, they visit a casino; with a protective police presence of M. Henri Bencolin and others. Raoul enters the Card Room, and the waiter enters to find him beheaded with a decorative sword which had been on the wall.
The Card Room had been under constant observation. It is assumed the killer (Laurent?) was lying in wait in the room, yet no one observed him leave. A search finds the room directly above occupied by Sharon Grey, mistress of M. Edward Vautrelle, a friend of Raoul.
Narrator Jeff Marle enjoys an evening with Sharon Grey, while jealous Vautrelle exits through the garden. Marle and Grey find him dead.
Review:
This locked-room puzzler had me guessing at various secret mechanical devices or hidden entrances, but no such unfair advantage is taken. This is a shell game, in which we are led to believe a certain premise up front, and all that follows is built upon that premise; however the premise turns out to be false. The solution is startling, and I thought about it quite a bit after reading to comprehend the sequence of events.
I do like characters to be introduced to the reader up front, and it was puzzling who the narrator was. Midway through the book we get a first name, "Jeff", and nearer to end we get the last name "Marle" and that he is a friend of Bencolin.
The explanation is provided in Chapter XIX, "The Hour of Triumph". In a description of the events in the card room, there is a footnote (p. 319 in my 1930 Collier Front Page Mystery edition) which says "See plan." I expected to find a drawing of the room, but none is provided.
Posted by Rick Mills at 10:24 AM