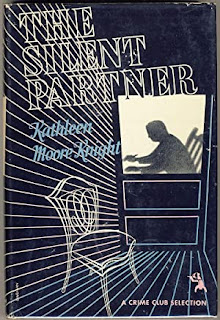 abebooks.co.uk
About the author: Surprising little is known about Kathleen Moore Knight (1890-1984), at least online. She is not listed in Wikipedia nor the more popular mystery fiction directories; her bibliography is on Fantastic Fiction. My count is 34 mystery novels, all published by the Crime Club; a few under the pseudonym of Alan Amos. See this 1946 interview.

Synopsis: Lerida, Florida has seen better days. Old gracious estates are being bought up by the Silver Sands Development Company, who put in tacky tourist traps, amusement parks, and cheap motels. The disgusted locals have a hard time organizing against them, as the company is run by a "silent partner", whose identity is unknown.

Three estates remain on the shore:

Craig calls out from the terrace. Julia and Tevan come out to find an injured man staggering over from Riverside, next door. He collapses in front of them, his last words being "Silver Sands". He is later identified as Grady Slemp, an employee of Silver Sands.

Circumstantial evidence points to Craig as being the murderer. Julia and Tevan try to find out who is being Silver Sands, until they are attacked as well.

Review: This is the first Knight novel I have come across set in Florida (the others are mostly Cape Cod or Central America). The setting of the town being developed away is done well, and the three adjoining estates are a great setting. It looks like the head of Silver Sands is the culprit, and suspicion falls on several townspeople in turn.

There are a few surprises in store on one of the estates, and the developments there are numerous and creepy. Knight always does the heroine foolishly going out into the overgrown estate at night, but it is always entertaining and fresh. This is another great well-rounded offering from an underrated writer. I continue to add to my collection of her writings, still available if you search around a bit.