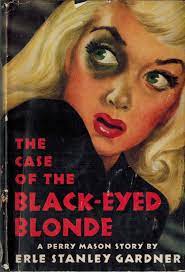 Major characters:
Locale: Los Angeles
Synopsis: Diana Regis shows up at Perry Mason's office. She has been assaulted - and give a black eye - by Carl Fretch, stepson of her employer, Jason Bartsler. Bartsler is a mining operator, and due to limited vision, has employed Diana to read him various articles and printed matter in the evenings. The assault occurred after a dinner date with Fretch went bad and he made her find her own way back. (Diana had an apartment with roommate Mildred Danville, but also had a room at Bartsler's home for her convenience while working there).
She arrived back at Bartsler's to find Fretch holding Diana's purse, and showing Mrs. Bartsler it contained a diamond pendant belonging to her - alleging Diana had stolen it. Jason, being the problem-solving executive, offers Diana - through Mason - a quick $1500 settlement to forget everything, which she accepts. Case closed.
Jason likes Mason, and hires him to solve a separate problem of his own. He had a son, Robert Bartsler, who is missing in action from the 1941 attack at Pearl Harbor. Robert and his wife, Helen, apparently had a son which Jason was unaware of; and wants Mason to track him down. Helen is apparently putting the child up for adoption.
Mason and secretary Della Street go out to Helen's home, and find a blonde woman dead in back of the house. They initially think it is Diana Regis, but it turns out to be her roommate Mildred Danville; who resembles her.
Review:
(caution, potential spoilers here)
I do enjoy a Perry Mason, especially when there is a limited cast of characters to follow. Sometimes there are way too many to follow without making notes, but this one is quite concise.
In this early Mason, he is much tougher than later stories; and his relationship with Della quite a bit more steamy - they get to the point of deep kisses and making out in his car [shocking!].
I was fooled on one big account. I was expecting Robert Bartsler, MIA but never declared dead, to show up and become part of the plot. But no, he continued to rest in peace. Perhaps his role cast as a Pearl Harbor casualty (only three years before this writing) was too serious to be trifled with.
The one big annoying aspect of this story is that the cad, Carl Fretch, never got what he had coming to him. He walked away without being prosecuted or becoming the next victim. Tsk, tsk.
Also see this review by Bev Hankins on My Reader's Block.