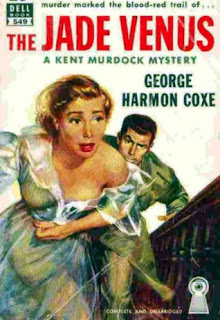 About the author: George Harmon Coxe (1902-1984) began writing in the nickel and dime pulps for pennies a word. He was a particularly prolific author, writing a total of 63 novels, his last published in 1975. The Mystery Writers of America named him a Grand Master in 1964. (condensed from fantastic fiction)
Major characters:

Synopsis: Kent Murdock is coming home to Boston on leave by train. Murdock is in the Fine Arts Division of the AMG (Army Materials Group) which inventories artwork in Europe for restoration after the war. He is briefly abducted by Erloff and Leo, who borrow his ID to impersonate him to Professor Andrada; who has acquired three odd paintings shipped from Italy. However, Andrada knows Murdock by sight, and sees through the imposter. Erloff and Leo were after one specific painting, called The Jade Venus.