The League of Frightened Men by Rex Stout (1935) 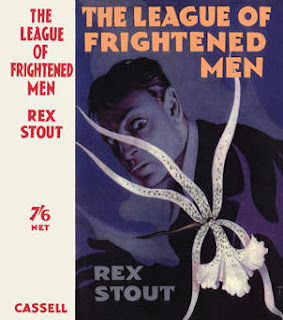 dustjackets.com
About the author: Rex Stout (1886 – 1975) was an American writer noted for his detective fiction. His best-known characters are the detective Nero Wolfe and his assistant Archie Goodwin, who were featured in 33 novels and 39 novellas between 1934 and 1975. (wikipedia). (bibliography)
Locale: New York City
Synopsis: Nero Wolfe is approached by Andrew Hibbard and his niece Evelyn Hibbard. Andrew is in fear of his life and wants to hire Wolfe to protect him. He believes his old Harvard classmate, Paul Chapin, is out to murder him. Many years ago, Chapin was disabled in a hazing accident at Harvard, goaded on by Hibbard and his classmates - leaving Chapin without use of one leg, and dependent on a walking stick to get around.
Hibbard and his classmates had remorse for the incident, and called themselves 'The League of Atonement', and had tried to assist Chapin in various ways ever since. Now two of the classmates, Judge William Harrison and Eugene Dreyer, have died recently - and after each death a letter came from Chapin claiming responsibility - and that more deaths will follow. No evidence has been found linking Chapin to the deaths, so the police cannot step in.
Wolfe takes on the case with all the members of the 'league' as his client. Chapin turns out to be a pleasant, but complex individual as Wolfe tries to determine if he is a killer or not. Meanwhile, Hibbard disappears without a trace.
Review: This early Wolfe story is a favorite and is good for a re-read every few years after I have forgotten the details. It is a bit unsettling in spots, dealing with the hazing incident, and hints of sexual fetishes. I was a bit overwhelmed at the listing of the members of the league in chapter IV: 29 names! How to keep track of all of them? Fortunately, only a half-dozen or so figure in the story. Paul Chapin is just creepy. His wife is even creepier.
Please also see this review by Bev Hankins on My Reader's Block.
Posted by Rick Mills at 1:17 PM