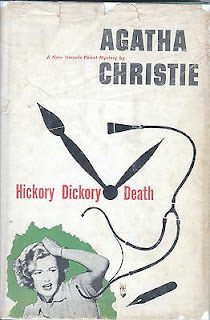 Major characters:
Locale: Greater London
Synopsis: Miss Lemon, secretary to Hercule Poirot, relates how her sister, Mrs. Hubbard, is having some troubles at the hostel she manages. It sounds curious so Poirot goes to see her.
The Hickory Street Hostel (hence the title), consists of two separate buildings (one for men, one for women), joined by a common dining/lounge area. The residents are mostly students, with a few general renters thrown in.
Mrs. Hubbard manages the day-to-day operations on behalf of the owner, a rather biploar Mrs. Nicoletis, a hard-drinking Greek who alternates between screaming rage and bubbling praise.
The hostel has been plagued with a rash of strange little thefts and small vandalisms. The items stolen have no intrinsic value - cosmetics, a shoe, light bulbs, bath salts, a compact, etc. A rucksack (backpack) and a scarf had been stolen and cut up. Only one valuable item - a diamond ring - was stolen, but quickly returned. Was it taken by mistake?
Poirot finds one of the roomers, pharmacy dispenser Celia Austin, is the culprit. It appears she had been trying to attract the attention of psychology grad student Colin McNabb by assuming symptoms of kleptomania*. She confesses to the roomers and that seems to be end of it, but that night she is found dead by poison; and Poirot is convinced it is murder.
* the recurrent failure to resist impulses to steal items even though the items are not needed for personal use or for their monetary value. (APA, as quoted in linked WIkipedia article)
Review: It is not a significant crime, but rather some petty thefts which attract the attention of Hercule Poirot - and not through the police, but rather his secretary. The hostel is home to a variety of personalities and backgrounds, and the mix makes for a good story.
The list of pilfered items is a puzzle, trying to find what they may have in common. The reader would be best to consider which two of these items are not like the others? The episodes of which poison is in which bottle is quite a shell game, and I didn't attempt to follow the moves there and just took her word for it.
I thought I had the culprit in mind from the start. Then, I abandoned that choice as too obvious. Silly me, fooled by Agatha again.
Looking for my mystery reading challenges? Visit The Mystillery
Posted by Rick Mills at 10:16 AM