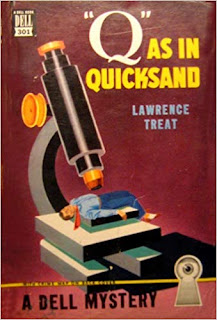 About the author: Lawrence Arthur Goldstone (1903–1998), better known by his pen name, Lawrence Treat, was an American mystery writer, a pioneer of the genre of novels that became known as police procedurals. Treat wrote several hundred short stories for mystery magazines and other publications. He was a founding member of the Mystery Writers of America and a two-time winner of the MWA's Edgar Award. (wikipedia)

Synopsis: Gobelin is a company town, the company being Gobelin Lock Works; manufacturers or various locks - and during WWII, casket hinges. The company was run by three brothers: Quentin, Asa, and Ward Gobelin.

Martin Folger is just out of the Army, and stops in to clear up a loose end. Three years previous, he and Ralph "Long Ears" Reddick were witnesses to car accident in which Quentin and his two-year old daughter, Jackie, died. There is a legal question as to who died first, as the inheritance path differs on that point. If Jackie died first, Quentin's estate passes to his brothers. If Quentin died first, the estate passed to Jackie, and then upon his death, to Quentin's widow Lydia Harte.

Martin falls for Lydia, but sexpot Olive Standish is a temptation. Competing interests want Martin to change his witness account to their benefit. Then Asa Gobelin is found dead in a locked room (of course).

I have trouble following a lot of the action in Treat's writing, as he tends to not explicitly state what is happening, where the characters are, and who is present. He tends to follow the thoughts of random strangers who are in the vicinity; which is a distraction but runs his word count up. His writing is the hard-boiled style with lots of tough guy clichés and innuendo.

It does settle down about halfway through the book. Of special interest and enjoyment are the accounts of petty jealousies within the police department and how those are dealt with.

The plot of finding who died first (within seconds of each other) three years ago is interesting and resolved nicely.