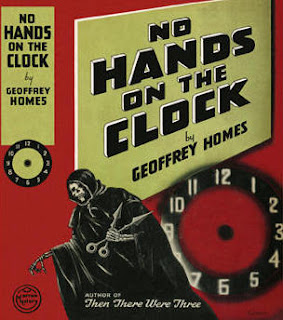 About the author (gadetection): Geoffrey Homes was a pseudonym for Daniel Mainwaring (1902-1977), an American novelist and screenwriter. He was born in California, and attended Fresno University. He held various jobs, including migrant fruit picker, private investigator and reporter, before turning to writing in the thirties. He subsequently became a screenwriter for movies. Homes's series characters were Jose Manuel Madero, LA reporter Robin Bishop and PI Humphrey Campbell. Bishop eventually marries Mary Huston, a secretary at the Morgan Missing Persons Bureau detective agency.

Synopsis: In the opening, workers are installing a strange clock on the outside wall of the Darwin Mortuary - a clock with no hands. Leon Darwin explains it is because "death is timeless".

Humphrey Campbell is in a bank when it is robbed, and one of robbers mentions that Campbell is familiar. The robbers escape. Campbell and Oscar Morgan work as private "heir finders", and are hired by millionaire Warren E. Benedict of Lake Tahoe to locate his missing son, Dale Benedict, last seen in Reno. Dale is engaged to Warren's ward, Rose Benedict.

Campbell and Morgan head to Reno. Campbell meets up with "Gypsy" (Mrs.  Billie Toker), who is waiting out the residency requirement to obtain a divorce by hanging out in a bar, where David Paulson plays piano and knows everyone and everything. Paulson tips him off that Dale had left with redhead Irene Donovan. Campbell heads to her place, only to find her murdered. Then a ransom note arrives for Dale Benedict.

This book reminds me of the writings of Erle Stanley Gardner, when he wrote at A. A. Fair. There are no long descriptions, but nonstop tough guy action on every page. We have the wisecracking P.I. who is, of course, irresistable to women. Much of the action takes place out in desolate desert at night, again reminiscent of Gardner.

There are a couple of odd aspects: every character gets named, no matter how brief their appearance in the story. When someone pops in for a moment, the reader wonders if he will have to remember this character for future reference. The other odd aspect is the clock with no hands installed at the mortuary - from its appearance in chapter one, one expected it would have a central point in the story - much like the various clock and candle gimmicks in Gardner - but it was carefully described at the beginning and that was that. There was only one additional passing reference to it near the end. And I was looking forward to hearing more about it.