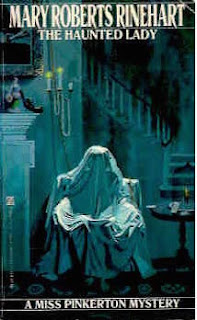 Major characters:
Helpful hint: If you get confused about the relationships of the players, refer to Chapter 16 which has a police report and full bio on everyone.

Map: The Dell Mapback provides this handy map for us (click to enlarge): 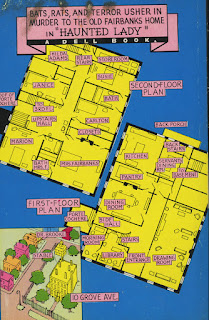 Synopsis: Frail, paranoid widow Eliza Fairbanks complains to the police that bats are getting into her bedroom, although there are no obvious apertures. She wants a police officer to resolve this, but Inspector Fuller sends Nurse Hilda Adams ("Miss Pinkerton") over instead, to stay with her and calm her down, and see what can be done about the bats. Nurse Adams does indeed come across a bat, and an occasional rat also. Although she searches the room thoroughly, she cannot find how they got in.

Eliza also states someone attempted to poison her with arsenic and there are also rats in the house in addition to the bats. Both statements are confirmed - Dr. Courtney Brooke (quite friendly with Eliza's granddaughter Janice Garrison) identified the arsenic, and Nurse Adams saw a rat herself.

Drama comes along: Frank Garrison is visiting to see his daughter Janice, and his ex-wife Marian Garrison disappears. His 2nd wife, pregnant Eileen Garrison, shows up at the door. She is not feeling well and is put to bed in Marian's bed, wearing Marian's nightgown. (Oh, this will be most awkward when Marian gets home!)

Hilda goes in to check her patient to find she has been murdered in her bed. Suspicion immediately falls on son Carlton, last person to enter her bedroom.

Review: It seems as if we have been here before. The dark old family manse, ruled by a frail, elderly (wait a minute - she's only 72!) widow dowager with loads of money in the bank - and inhabited by sniping relatives (don't these kids ever move out?); most of them impatient to get to the reading of the will. Mysterious sounds in the night, and doors that open and close by themselves add to the atmosphere.

We shall overlook the fact that having rodents in the house is not a police matter, and furthermore insufficient to justify placing an RN in residency*; when a cat would be the more appropriate choice. But Nurse Hilda is our investigator, and here she is. Mary Roberts Rinehart's signature "Had I But Known" teasers abound, pointing us to clues to remember as we go along.

Nice unexpected twist at the end reveals the murderer whom I did not suspect.

*This writer is fortunate to have an RN in residency, and she is adamant that rodent control is not in her job description.