The Deaves Affair by Hulbert Footner (1922) 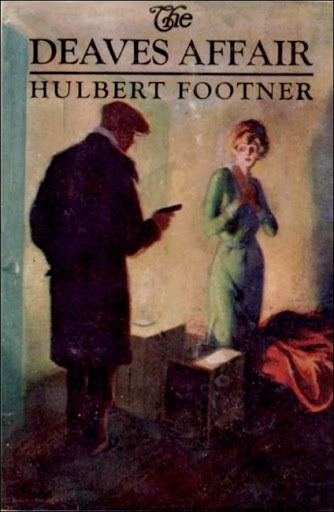 You can read this book online here.

Synopsis: New York artist Evan Weir is out and encounters an old, apparently destitute gentleman, Simeon Deaves, arguing with a vendor, and intervenes to save him from injury. Accompanying him to his home, he meets his son, George Deaves. George explains that his father enjoys going out for walks, but usually winds up having arguments with people and generally getting into mischief. George hires Evan to accompany Simeon on his walks, and generally look out for him.

Now, a complication. The Deaves begin receiving polite (and amusing) blackmail letters. The blackmailer offers to sell them little stories about Simeon's embarassing adventures - and if they do not buy, they will release them to The Clarion newspaper. Now the Deaves expand Evan's job description to include finding the blackmailers, known as The Ikunahkatsi.

Evan works at finding the blackmailers, even making one of the payoffs in the reading room of the New York Public Library.

Evan, meanwhile, has become enchanted with a pianist, Corinna Playfair, lodging in the same building. Despite his approaches, she remains distant. She moves out suddenly. Evan traces her to an organization called The Ozone Association, which provides activities and meals for poor children aboard a boat The Ernestina as it cruises around New York harbor. Corinna and rival Leonard Anway work providing meals, and Evan steps in to assist by telling adventure stories to the children. Evan works on the boat but is unable to get Corinna to warm up to him.

Review:  The blackmailers are quite polite and amusing, even providing receipts (!) for the blackmail payments. The concept of paying to purchase an embarassing story is not unique - this is the same catch-and-kill routine used by Donald Trump and The National Enquirer to quash stories about his affair with playmate Karen McDougal).

The first half of the book deals with the Deaves and the blackmailers. The second half takes a sudden turn, with Evan leaving the Deaves to focus on Corinna's activities aboard The Ernestina. I had doubts that the story line would return to the Deaves, as the two story lines had been completely separate; and there was no apparent connection. However, a connection does occur and Evan gets in trouble with the blackmailers at their hideout.

This 1922 story is notable for its lush descriptions of New York City of that era, and especially the ways of getting around the city. I wanted to get out a map and follow his adventures, that much detail is provided.

The blackmail payoff scene in the New York Public Library reading room is quite amusing - I have been in that room and it certainly has not changed in appearance or protocol since 1922.

This is a good read with considerate blackmailers, Manning Coles style humor, and a love story intertwined.