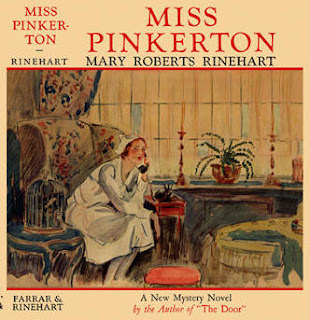 Synopsis: Herbert Wayne lives on the 3rd floor of his aunt's (Miss Julia Mitchell) run-down mansion. It has seen better days - the only servants remaining are Hugo (butler) and Mary (cook, and Hugo's wife). Herbert had been speculating on stocks and now he is found shot. No one can determine if it was murder, suicide, or accident (he had been cleaning his gun).

Miss Julia is feeling poorly so Inspector Patton plants Nurse Adams in the home as her nurse. Wayne's girlfriend, Paula Brent, is distraught. Then it comes to light that her former boyfriend, Charlie Elliott, has been hanging around and threatening to do away with Wayne in order to get Paula back. This puts him at the top of the suspect list.

Nurse Adams is a great sneak to be our investigator. When talking on the phone to Inspector Patton, she addresses him as "doctor" so the family won't suspect. A lot of the book is devoted to figuring out if waster Wayne is a murder, suicide, or accident - and there is a lot of hanky-panky going on with the crime scene evidence too. The use of a newspaper in a murder is a new one.

I do like the amusing episodes - the funniest is when Nurse Adams is keeping watch over her patient, Miss Julia, at night; and each is waiting for the other to fall asleep (reminiscent of Humphrey Bogart in Treasure of the Sierra Madre) - with alternating peeps over the bed's footboard. Another amusing happening is repeated incidents of people getting trapped on the mansion's roof!

I learned a few essential things from this book: