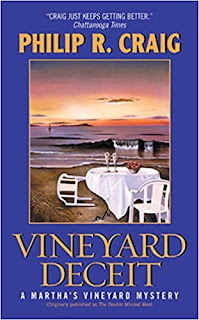 This is J. W. Jackson #3, Also published as "The Double Minded Men".

Synopsis: A middle eastern potentate, the Padishah of Sarofim, has come to Martha's Vineyard on a quest to reclaim a priceless emerald necklace stolen from his country decades ago. It is now in the possession of the Stonehouse sisters - farmer Amelia Stonehouse Muleto and Emily Stonehouse Damon, wife of diplomat Edward C. Damon.

The return of the necklace was negotiated to occur at Damon's mansion, in exchange for a sum not mentioned. The police have rounded up extra security for the event, including J. W. Jackson. The plan is for the two necklaces (the real one and a paste copy) to be displayed, the real one turned over to the Padishah, while Emily retains the paste copy, prior to a big celebration party.

The handoff of the paste copy goes as planned, but when they open the box for the real one, it is empty. Guests are searched, the house is searched - no necklace. Shortly afterward, Willard Blunt, one of the bankers who was responsible for guarding the necklace is found dead.

Review: It is so relaxing to settle down with a Martha's Vineyard mystery. They are a bit hard to find on the used market, I suspect people are hoarding them. I have managed to find all but #1 so I have a good stash.

This was an excellent story. The bad guy is the Padishah, who is described as a "petulant child in a man's body", is controlled by his advisers, and is more interested in grabbing women in their private places than governing. This is soooooooo familiar to our own [insert name of a president here] who, at this writing, has just 9 days remaining in office. But I digress.

Back to the story .. an interesting story line is when J.W. teams up with Helga Johanson, and she winds up in his house .. wearing Zee's clothes .. and Zee finds out ... but it gets straightened out.

The theft of the emerald necklace looked like the old switcheroo coming up, as there is a real one and a fake one. I thought I knew how the real one got stolen and snuck out of the house, but no, the red herrings tricked me. The actual logistics of the theft were quite a surprise, and definintely a method I had not seen in other books.

A couple enjoyable characters: Manny Fonseca and Bonzo. They have small but essential parts, and I hope they return in future titles, which await me on the shelf.