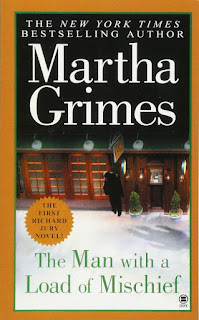 This is #1 of 25 books featuring Richard Jury. See this Wikipedia article for biography and list of the 25 Richard Jury books. Click this Martha Grimes label to see all my reviews of this series.
Major characters:
Locale: England
Synopsis: The village of Long Piddleton endures two murders in as many days. The first is William Small, Esq., who is found garroted - and if that is not enough, he is stuffed headfirst into a beer keg at the Man with a Load of Mischief pub. The next day Rufus Ainsley is found dead, his body resting on the support bar for the sign over the Jack and Hammer pub. Both men are strangers in town.
Inspector Richard Jury of Scotland Yard is called in. With the help of local ex-lord Melrose Plant (and despite help from Plant's Aunt Agatha Ardry) Jury sets about to find the killer. In the meantime the vicar's housemaid, Ruby Judd, has disappeared as well. Most of the locals all have something to hide, but what is the motive to knock off three men at three pubs?
Review: This was my first read of a Richard Jury book, and it is a delight. I quickly found that the book could not possibly be read quickly - it is so full of wonderful language, dialogue, and even strange use of words (there was no customing going on in the pub ... because there were no customers). This book immerses the reader in the coziness of British pubs. The description of The Man with a Load of Mischief pub with the dark, low-ceilinged dining room and bar downstairs, and a number of guest rooms upstairs, closely matched my only experience with the like, being The Wayside Inn in Sudbury, Massachusetts. I am now in the process of gathering more Richard Jurys!
and then nowwe have this little mystery...apparently no connection to the book, but could there be a musical? 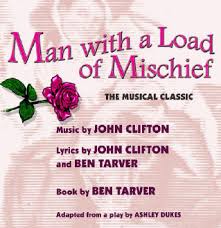