The Whip-Poor-Will Mystery by Hulbert Footner (1935) 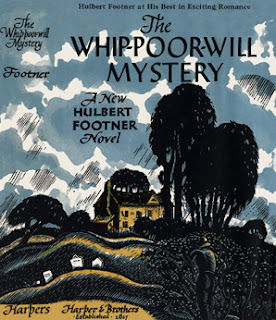 dustjackets.com
About the author: See this Wikipedia article.
Major characters:
Locale: Maryland
Synopsis: Weir Lambert publishes a small local newspaper in rural, coastal Kentville, Maryland. Kentville is inhabited by a few families, and also several slave-descendant families who live in shacks. Weir runs a personal ad from "The Girl on the Hill" which asks for her lover (the Whip-Poor-Will) to come to her quickly, as the "man" is gone away. This results in an uproar among the locals, for running such a obviously sinful ad from a shameless hussy in their paper. The locals try to find out who she is, but only Weir and sheriff Frank Baker figure it out with the use of some topographical maps.
Weir goes to the house to find it guarded by Saul Cowdin, a large Black caretaker. Weir sneaks around him to get to the main house, and finds a 17-year old girl, Leila Cowdin, living in squalor. Weir brings her some food and finds her putting a coffin together, with the dead body of her father, Lee Cowdin, in the house. She had found him outside, dead from a bullet wound. Weir urges her to contact the authories, but she refuses. Relucantly, Weir helps her bury Lee in a shallow grave.
The authorities discover this. Leila is arrested for murder, Weir arrested for being an accessory. They manage to break out of the town's simple jailhouse and flee together, with Weir confessing his love for Leila. Weir then searches for the murderer.
Review: At one-third of the way through I came to a screeching halt. The use of racist language pertaining to Black Americans is awful. The n-word is used, and various stereotypes are used against Black persons. I could not figure out if this comes from the author's prejudices, or if the author was trying to write realistically for characters in 1930's Maryland. In any event, it was unnecessary. I was disgusted and almost tossed it aside and crossed this author off my list, but I will give it a chance as the mystery is unusual and I am looking to see how it resolves.
Later: The racist talk was pretty much confined to one chapter. After that, we have a straight mystery story; which is pretty good given the earlier language. I can only rate this one star as the racist language sinks the entire book.
Posted by Rick Mills at 10:41 AM