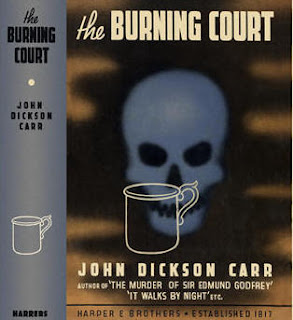 Synopsis: Ted Stevens is working on a manuscript submitted to his publishing house. The manuscript, by Gaudan Cross, is about historical poisonings by women. One of the photographs in the book is captioned "Marie D'Aubray, guillotined for murder, 1861". This happens to be Ted's wife's maiden name, and the photo is his wife, in period dress, wearing her favorite bracelet.

When he asks Marie for an explanation, she brushes it off, and the photo disappears from the manuscript - later the entire chapter will disappear.

Another resident of the village, Miles Despard, had died recently of a stomach ailment. After the burial, his nephew, Mark Despard, begins to suspect arsenic poisoning. He arranges to open the crypt and have Dr. Partington do a secret post-mortem to see if arsenic is present. Mark, Dr. Partington, Ted, and gardener Joe Henderson open the crypt and open the coffin - but there is no body inside.

The mystery deepens when it is learned that Miles had a visitor just before he died - and this woman left his room through a bricked-up door!

How did the mysterious woman escape from his locked bedroom through a bricked-up door? And how did how did his body get out of the coffin and crypt?

Review: This Carr gives us two locked-room mysteries in one. After these are set up, the middle portion of the book delves into the historical/witchcraft themes of which Carr is so enamored; yet they have little bearing on the mysteries at hand; and just serve as misdirection. I didn't pay too much attention to following these historical notes (and it is not clear whether they are factual or not); and that didn't affect my understanding of the present-day mysteries. There are plenty of red herrings tossed about. A good read - but don't worry about the past too much.
Posted by Rick Mills at 7:31 AM