The Tragedy of X by Barnaby Ross (Ellery Queen) 1932 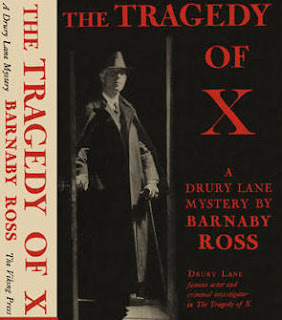 About the author/series: Barnaby Ross is a pseudonym of Ellery Queen. This is the first of four books in the Drury Lane series, the remaining three being The Tragedy of Y, The Tragedy of Z, and Drury Lane's Last Case.

Broker Harley Longstreet and a handful of friends took a crosstown Manhattan streetcar on a rainy night. He put his hand in his pocket, immediately collapses and dies. A cork ball loaded with poisoned needles is found in the pocket. The authorities narrow the suspects to those on the streetcar. Each companion is investigated for motive, the leading suspect being his partner, John O. DeWitt, known for having an affair with Longstreet's wife, Fern; as well as making advances to their daughter, Jeanne.

An anonymous letter arrives, promising information about the killer, who they term "X". On the way to meet with the writer aboard the NJ/NY ferry, a man is killed - Charles Wood, the conductor of the streetcar. John DeWitt happens to be on board, and the only passenger who was also on the streetcar that night.

Drury Lane investigates to find the killing has its roots in a earlier mining syndicate in Uruguay, comprising Martin Stopes, William Crockett, Longstreet, and DeWitt.

I read the four Barnaby Ross books periodically to immerse myself in the eccentric world of Drury Lane in his Hudson estate, the same environs of Philo Vance of the S. S. Van Dine series. I been been fortunate in finding copies of all four. The novel is straight police procedural, until the police get bogged down and resort to consulting Drury Lane. Several obvious suspects, but they, of course, turn out to be red herrings. Lane uses his theatrical skills to engage in some sleuthing of his own and find the ulterior motive behind the murder. As always, reading the four books in the proper order (Tragedy of X, Tragedy of Y, Tragedy of Z, Drury Lane's Last Case) is always recommended, as each tends to refer to previous exploits.