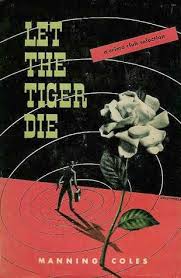 
The "Middle Europeans":
The Germans:
Captain Dirk Gielink of the Melicent Myrdal

Tommy Hambledon is in Stockholm, Sweden. He observes a German abducted by three "Middle Europeans" whom he calls Brown, Jones, and Robinson (BJ&R) - not knowing their real names. He follows i a taxi. The German attempts to escape. In the fracas, Brown, Jones, and Robinson shoot the taxi driver, and the German - who hands Tommy a mysterious packet before he dies, whispering the words "Santa Brigida".

BJ&R tell the police it was Tommy who shot the others, and now Tommy is wanted. He boards the boat rented by the trio, which sets out. The ship's engineer attempts to throw Tommy overboard but falls out  himself. The boat becomes disabled, Tommy gets a tow from the Melicent Myrdal to Rotterdam, the Netherlands.

There is great confusion upon arrival. Skutnas gets arrested.

Hambledon, travels to Paris. He is followed by Olgar and Wenezky, who are after the packet. Hambledon crosses into Spain and winds up in a prison. His old friends William Forgan and Archibald Henry Campbell, track him down and contrive to wind up in the prison as well. The local communists attack the prison and the three of them escape. Finally they arrive at Santa Brigida to find various Nazis taking over a hotel and planning the comeback of the Third Reich.

Any Manning Coles novel is a delight. Tommy Hambledon is an adventurous agent, always jumping into conflicts with little planning, hoping that, as his favorite saying goes, "some scheme will doubtless present itself." These schemes always involve impersonations, sketchy border crossings, chases, escapes, making general fools of the enemy, chaos, and explosions.

His friends Forgan and Campbell can always be counted on to jump to his side and assist. The chase across Europe occupies most of the book, with the Nazi encounter not occurring until the end. The Nazi meeting is disrupted in a most satisfying manner with the help of a friendly dog and a not-so-friendly fish.